The hood of this car is lightweight, but it is endowed with two gas stops. On its inside there is a noise-insulating material fixed with clips, 10 rubber dampers are installed to help reduce vibrations.

To open the hood, you need to pull the latch located on the dashboard in the cabin twice, while you do not need to look for the hood lock latch.

The engine on the Tiggo 8 ProMax crossover is installed transversely, the engine compartment is trimmed with decorative plastic on top, but not completely, so you can easily see the entire “stuffing” here.

The upper part of the battery is closed with a soft case, a rather dense wide protection is provided from below under the engine.

Before considering buying a Chery Tiggo 8 2022 crossover for yourself, as in principle the process of acquiring any other model, you should pay special attention to the safety of the vehicle. If you pay attention to this “Chinese”, then it fully corresponds to the title – a safe car. The fact is that according to the results of the C-NCAP test, the cross scored an impressive 84.31 points, and this is a five-star rating.

It is necessary to take into account the fact that the equipment of the crossover includes many security systems, as well as functions that are responsible for controlling movement. In accordance with current standards, this model is equipped with three-point seat belts, ISOFIX child seat anchorages, as well as 8 cushions. This provides adequate protection for the driver and passengers in a collision with other participants in the traffic flow or other obstacles on the way. 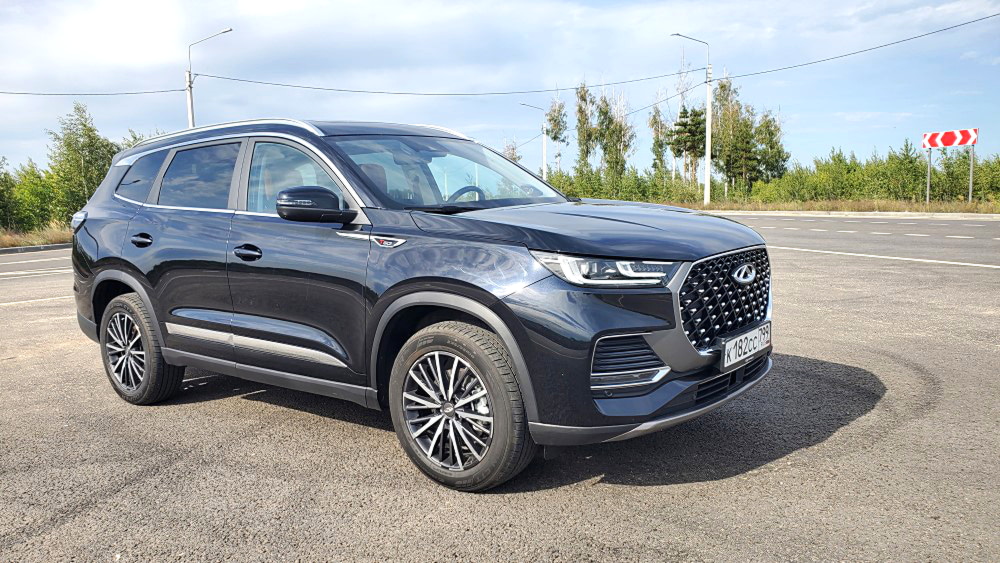 In the photo: Chery Tiggo 8 Pro Max is still a crossover, not an SUV…

Previously, Chery crossovers had only two driving modes – Eco and Sport. Lacked intermediate standard mode. In Tiggo 8 Pro Max, this issue was radically resolved. Now there are six modes to choose from, three of which are off-road. Switching between them is convenient, the round washer lies right under your right hand (in the usual 8 Pro it controls the volume).

The change of modes is accompanied by voice acting of the voice assistant, this can be turned off. It’s funny that one mode has three different names at once: on the central screen you see “Comfort”, on the instrument panel it says Normal, and the voice assistant calls it “Standard”. I would like to bring all this to a single designation. 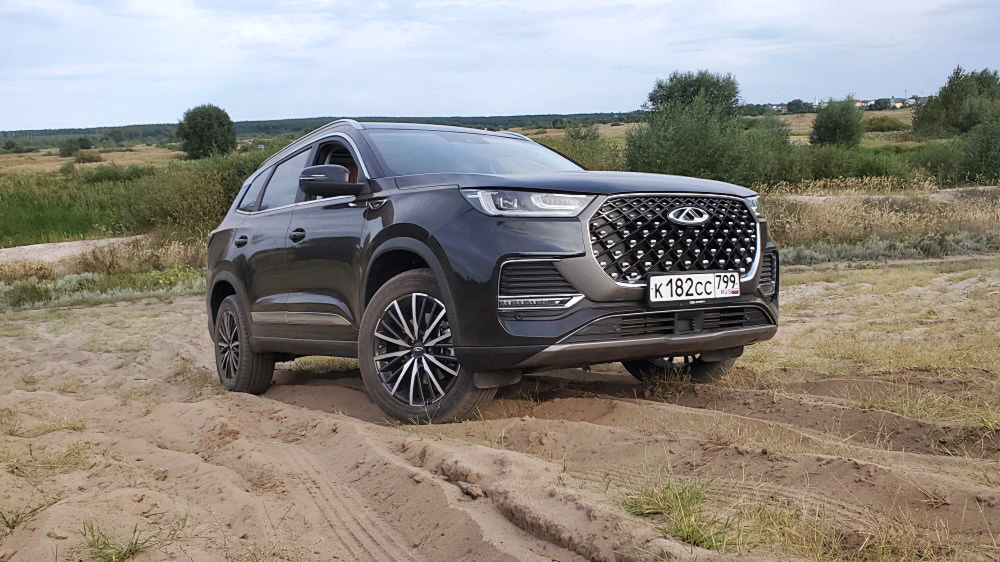 … but with all-wheel drive, it is ready to overcome rough terrain

The difference between modes is noticeable. Moreover, even Eco will not be “vegetable”, with a sharp pressure on the gas, the crossover accelerates very quickly. For everyday driving, the same standard-comfort-normal mode is suitable.

On the sand, we managed to try all the off-road modes. A big plus is that they are here in principle. In the same Exeed TXL, all-wheel drive works only in automatic mode, there are no settings. 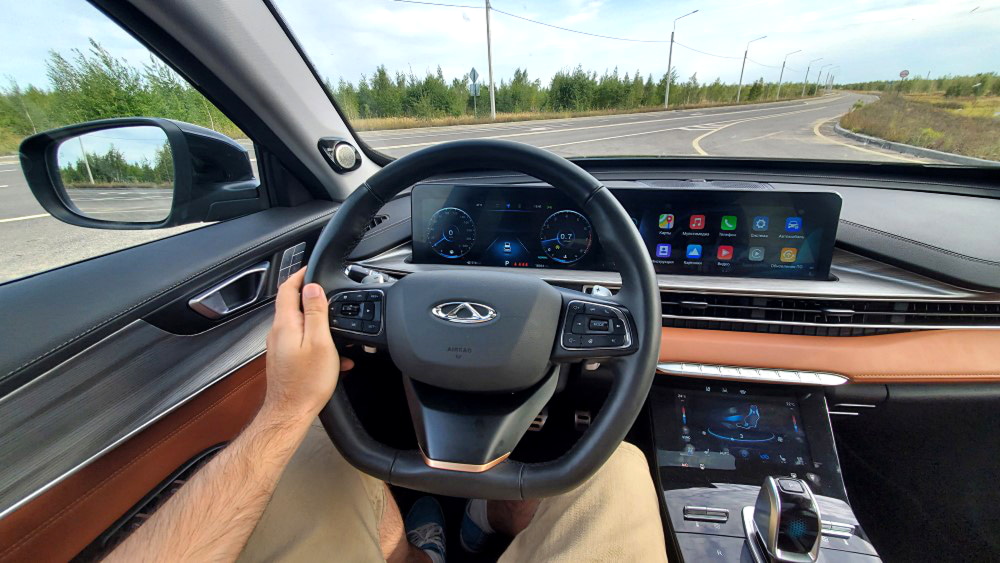 In the photo: when driving off-road, you should understand that you don’t really want to get out of the interior of such a car into the mud

Oddly enough, the Pro Max climbed the sandy mountain best in Snow mode. The possibilities of a crossover on such a road were surprising in a good way. Moreover, Cooper summer tires are not at all suitable for such trips.

In general, for a family crossover, such an all-wheel drive and a clearance of 190 mm are enough. But you should not overestimate the car off-road. The “robot” is set to take care of itself, and you have to be careful with the front bumper – at the bottom there is an adaptive cruise control radar.

The interior of the new crossover 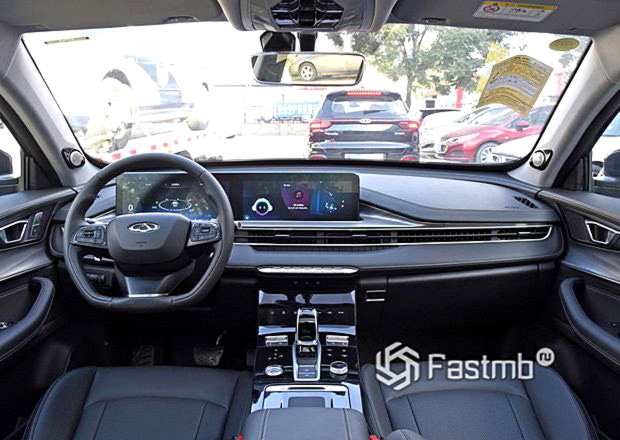 The interior of the new Chery Tiggo 8 Pro will surprise the buyer no less. As already mentioned, the car will be designed for 7 seats, according to the formula 2 + 3 + 2. Initially, the manufacturer in every possible way argued that the basic and top-end configurations would differ little in terms of functional filling, but nevertheless, the company’s website already has information that shows the main differences in the cabin.

The differences will be significant between Chery Tigo 8 Pro for China, Europe and Russia. The front panel for the Chinese market will receive a solid long display consisting of two 12.3″ displays. They also play the role of multimedia and digital instrument panel. 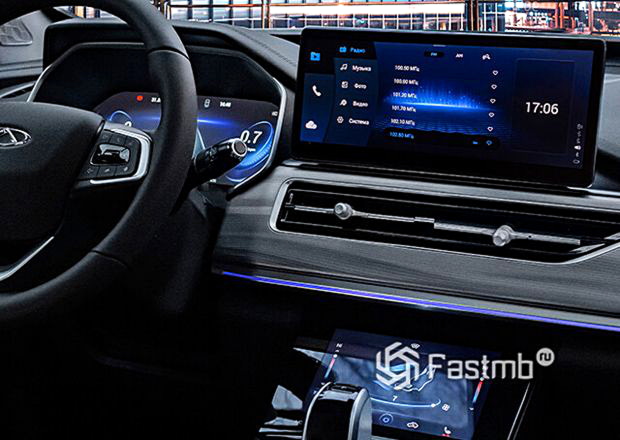 For the Russian and European market, the instrument panel and multimedia display will be separated, while the latter is made in the form of a tablet. There will also be differences between the trim levels of the Tiggo 8 Pro crossover for Russia. In the basic configuration, they will offer an analog dashboard with a 7″ on-board computer display, multimedia will be on a 10.25″ and 8″ touch screen climate control panel. If we talk about the top-end configuration of Chery Tigo 8 Pro, then here the buyer will be offered a fully digital instrument panel based on a 12.3″ display, the same 12.3″ display will be for the multimedia system, but for climate control there will be the same 8″ screen. 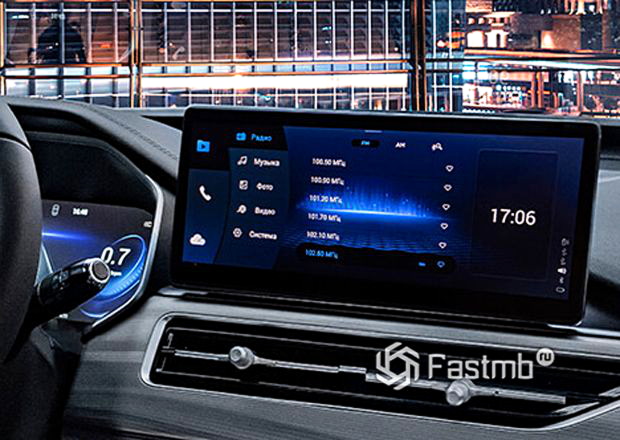 Regardless of the configuration of the Tiggo 8 Pro, multimedia will be based on two Android Auto and Apple CarPlay platforms, which is already becoming a standard for Chinese cars. On the pleasant side, it is also worth noting Bluetooth, voice control and other goodies, which are increasingly becoming standard. The crossover audio system received 8 speakers, but so far it remains a secret of which manufacturer the audio system will be.

There is no particular variety on the front panel of the new model, a multimedia display in the form of a tablet, a pair of air ducts a little lower and a full-width insert made of wood or polished aluminum. 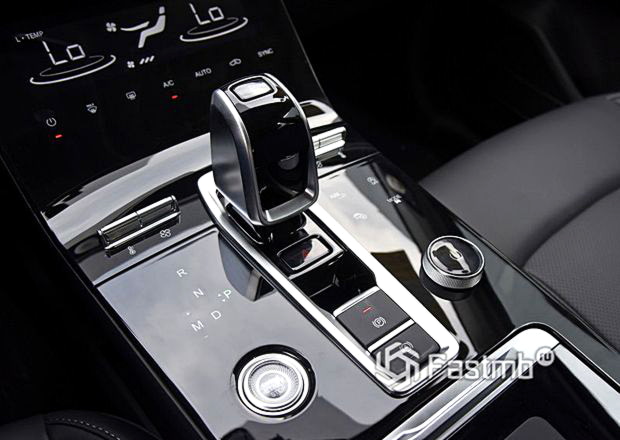 More functionality was placed on the central tunnel of Chery Tiggo 8 Pro. As already mentioned, at the very beginning there was a large 8″ touchscreen climate control display. It also implements the control of heating elements of the car (steering wheel, side mirrors, front and rear windows, heated and blown seats).

Below the tunnel is a small gearshift lever, with a parking button at the end. Closer to the driver, the designers have allocated a lot of space for the checkpoint indicator, as well as the engine start / stop button.

To the right of the gearshift lever are touch buttons for quick access to cameras, the choice of travel mode and the deactivation of the stabilization system. Nevertheless, for convenience, mechanical levers were left near the gearshift lever to control the temperature of the seats and the speed of the fans. The central tunnel ends with a pair of cup holders behind a hidden panel and a roomy armrest. 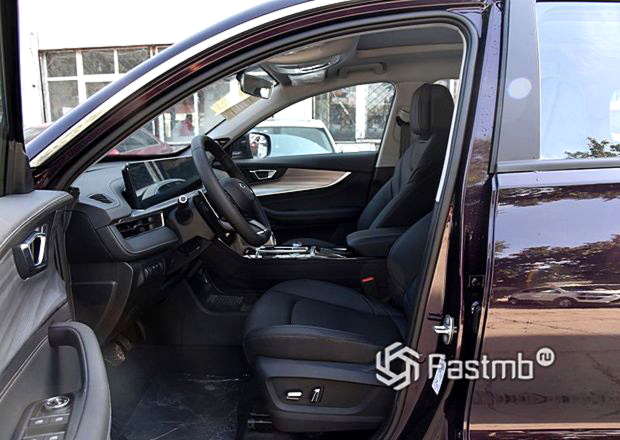 Now about the interior of Chery Tigo 8 Pro. As mentioned above, the interior is designed for three rows of seats, according to the landing formula 2 + 3 + 2. The first row of seats, like the front panel, depends on the configuration. In any version, the driver’s seat comes with an electric drive, but the front passenger seat can be with a mechanical adjustment drive or with an electric one.

On the plus side, it is worth noting the high back with adjustable head restraints, good lateral support and a comfortable fit. The top versions also have memory for two settings, heating and blowing. 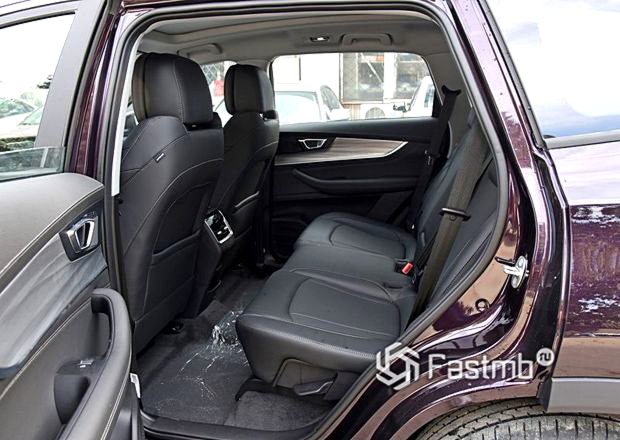 The second row of seats is made in the form of a sofa, designed for three seats, and in all likelihood will be offered only in this form factor. Although it would be nice to offer two full-featured captain’s seats. If necessary, the second row can be folded in a 60/40 ratio.

According to the manufacturer, this will be quite enough for a convenient and quick boarding of third-row passengers. With all this, the folding mechanism will be only mechanical. As for the third row of Chery Tiggo 8 Pro seats, only two passengers can sit here. At the same time, the average physique or children, and even then not for long trips. 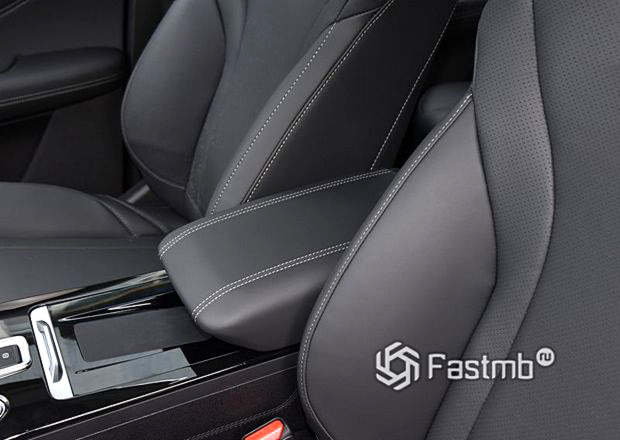 Not the last role in the interior design of Chery Tiggo 8 Pro was played by the skin. According to the company, it will be possible to choose between fabric or leather upholstery. The fabric will be offered in dark shades, but the skin can be either black or brown.

Yet, as for a Chinese car, there is plenty of free space. If necessary, the seats of the second and third rows can be folded, thereby obtaining a flat surface. The trunk of a crossover, as a rule, will be with a niche located closer to the rear. It is quite enough for a set of tools, a couple of small parts and other little things. Thus, there will be no unnecessary elements on the main part of the trunk. 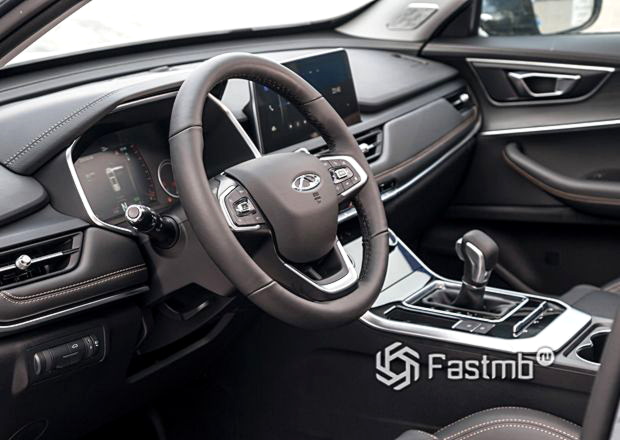 Finally, in the cabin of Chery Tiggo 8 Pro, it remains to consider the driver’s seat. Depending on the configuration, the panel can be analog with a large on-board computer display or fully digital based on a 12.3″ display. The steering wheel is made according to the classics, an even circle, three spokes and leather trim. On the plus side, the presence of function buttons, height and reach adjustment, as well as paddle shifters for gear shifting. As an option, the driver is offered to install a head-up display behind the dash and add memory for several steering wheel settings.

Well, the interior of the new crossover Chery Tigo 8 Pro will be able to surprise not only with the presence of 7 seats, but also with a good set of functions. So far, the question remains how much the interior of the Chinese and European crossover will differ, as well as what will be lost or what will this model acquire new. Otherwise, even in the basic configuration, the new Tiggo 8 Pro will be able to please the buyer with multimedia, high-quality sound from the audio system and comfortable seats.

In order to decide whether to buy such a vehicle, or better to look at the “classmates”, you should pay attention to the main pros and cons of the car. As for the advantages of Chery Tiggo 8 2022, the following can be highlighted here:

Also, do not forget about some of the shortcomings of the vehicle, namely, the lack of all-wheel drive modifications, the lack of alternatives in trim levels, not the most impressive technical characteristics in the class, the time spent on searching for components and spare parts (most often, you have to contact the dealer).