We recommend checking out the following reviews:

The list can be replenished with a good dozen more channels from all over the world, but for now let’s stop there! And if you have interesting reviews in store, then send us to the editorial office, We also want to replenish our list and if we see a positive response, we will also advise them, marking you!

in Top YouTube channels about cars in Russian: Garage 4 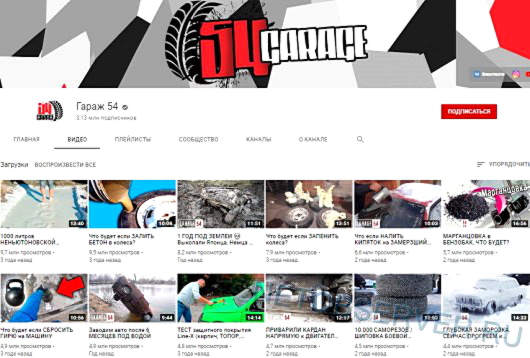 Our ranking of youtube channels about cars included reviewers, sellers, and craftsmen. But who has not yet been, so these are crazy experimenters! “Crazy”, of course, in a good way – just content creators do what other autobloggers, apparently, do not even come to mind. But the channel of Vladislav Barashenko began quite standardly and harmlessly – with reviews of the old Honda, Mercedes and drifting on the Zhiguli.

But already in the 22nd video of the Garage 54 channel, the video blogger showed what he was capable of, breaking all the windows as an experiment on his domestic car:

Probably the fact that this video is the only one of the “oldies” that has gained almost 2 million views, prompted Vladislav to think about shooting something original and unusual.

Let’s evaluate the “effectiveness” of the channel as of the time of preparation of the review: 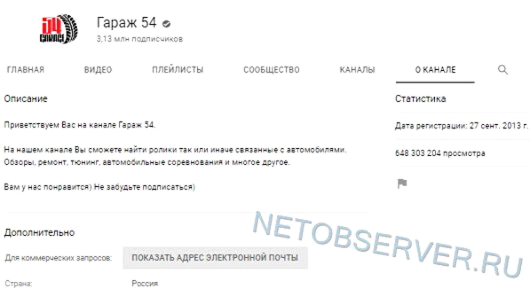 The most popular video as of April 2020 is the following (and it is not about cars at all):

If you are interested in seeing how Siberian men bring to life the most non-standard questions in the style of “What will happen if …” on automotive (and not only) topics, then you are here.

Go to the Garage 54 channel 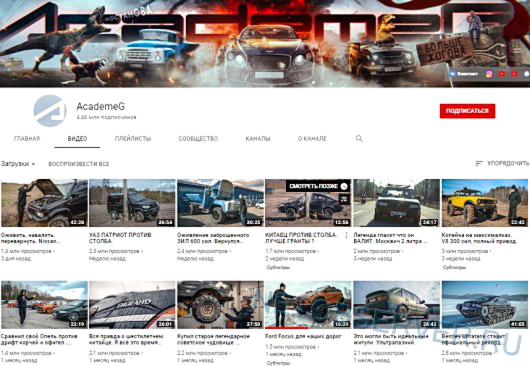 As in the case of Davidich, the person under the pseudonym AcademeG is familiar to any lover of automotive topics on Youtube. A thin blogger, whose real name is Konstantin Zarutsky, one might say, stood at the origins of the Russian YouTube – his channel is almost 10 years old (was launched in December 2010). Given that he did not have to take forced breaks in his activities, his productivity is noticeably better than that of SmotraTV – 571 videos at the time of preparation of this rating.

What topics of the automotive world does AcademeG reveal? Everything, like everyone else – reviews of the “secondary”, tuning with your own hands, test drives. Of the distinctive features – massive off-road races, their own “auto-series” – Pontorezka, Okaziya, Valya ZIL and other “fun”, which are very exciting to watch. Considering that Konstantin’s vocabulary is NOT replete with pathos, “boyish” vocabulary and heavy profanity, but in the “speech part” with an excess of humor and adequate information, such a massive number of subscribers is quite understandable: 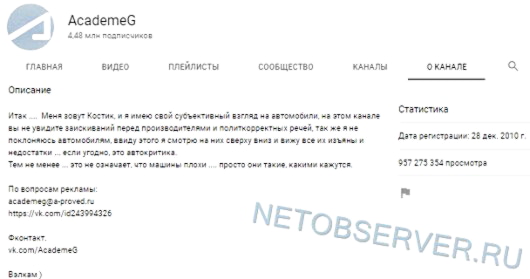 The channel is right and by no means slowly approaching a billion views! These are impressive numbers.

In the course of reviewing such channels, it is always interesting to see the “before / after” ratio. Let’s see how the AcademeG channel started at all, and which video is top in terms of the number of views.

So, here it is – video number 1 on the channel:

And here is the video, the total number of views of which has overcome the bar of 12 million:

Total: Academician is an example of excellent automotive content. Watch and you won’t regret it!

Well, now it’s time to find out who “broke” all the previous participants in the Top 10 YouTube channels about cars in Russian.