A bit of history

The first generation of the Honda Odyssey minivan went on sale in 1994. Initially, the car was only available in the US market, so the preferences of US residents were taken into account in its development. A spacious interior with a solid chassis and a beautiful exterior design quickly made this model a real bestseller.

A few years later, the car underwent a deep restyling and generational change. In 2013, an updated version for Japan was presented at the Tokyo Motor Show. It was only available with a steering wheel on the right side and resembled the previous generation.

In 2015, a hybrid variant was added to the lineup, and in February 2020, a left-hand drive minivan entered the market. Despite numerous exterior changes, the “fresh” Honda Odyssey largely repeated its predecessor. But the designers of the Japanese automaker have done everything possible to make it even more beautiful and unique.

Thanks to the next update of the 2021 Honda Odyssey, the Japanese minivan got a stylish appearance. If you look at the novelty, you can see a whole list of elements modified in shape, but a similar proportion and a recognizable exterior concept have not gone away. The body is literally replete with a large number of embossed parts that have a stepped and undulating design. Not without chrome elements, redesigned headlights, new air intakes and other improvements.

The front of the Honda Odyssey 2021 turned out to be shortened, but the hood has a slight slope. This had a positive effect on the quality of the driver’s view, despite his height. If you pay attention to the front side, she received a short but massive hood with triangular recesses on the sides. The central part of the front bumper has also changed its appearance. It already has a large strip with chrome plating, which is combined with a system of air intakes and headlights. The first received a small size and the shape of a polygon.

In addition, the air intake sector has a grid with thin black lines and the manufacturer’s logo. The badge itself is chrome plated. The optics stand out with a triangular shape and are fixed at an angle, making the appearance of the Honda Odyssey look more aggressive and bold. The Japanese also did not do without LED optics, which is already in any design and perfectly illuminates the road.

The lower body kit does not have much space, but it has a light relief on the outside. The design has recesses for fog lights with a glossy edging, an additional air intake for better cooling of the engine compartment, as well as a large number of embossed strokes. As for the plastic inserts on the body of the Honda Odyssey 2021, there are none.

Engineers have improved visibility from the driver’s seat. They decided to combine the front windows with the front door pillar, which improved the visibility of corners by 5 percent. The pillar also has a smart design that improves visibility by 1.5 degrees, and the front of the window has been redesigned to improve cornering visibility by 8 percent. 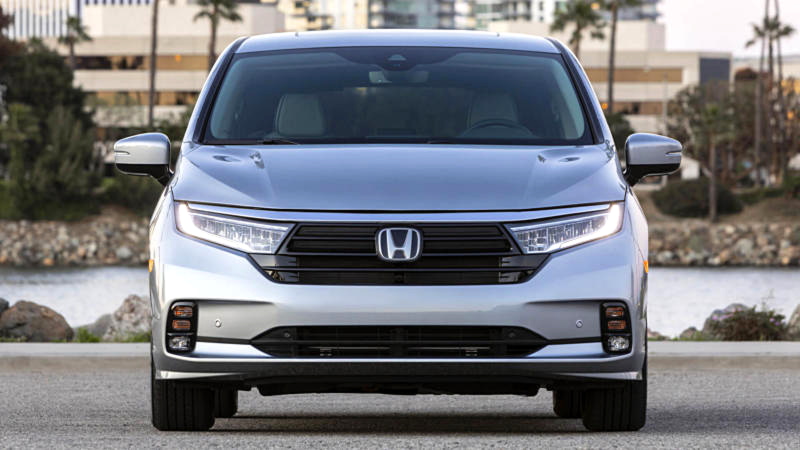 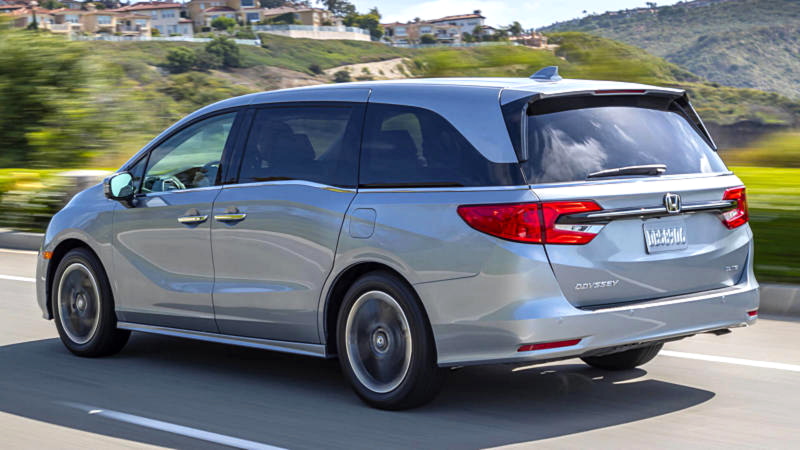 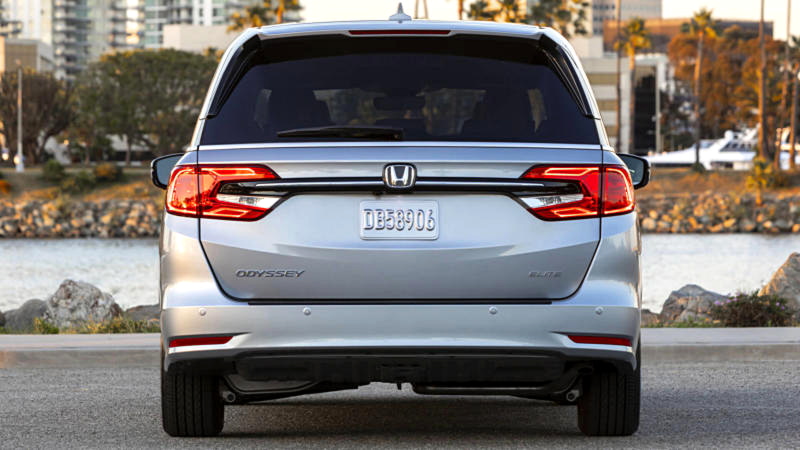 The side of the Japanese minivan also turned out to be stylish and modern. The lion’s share of the side part, the company’s engineers took away for a long strip of glazing, which is divided into sections using black glossy racks. Not without a chrome frame. The top end features unique triangular side mirrors and stylish turn signal repeaters. Similar elements were also placed on the front wheel arches. Chrome-plated door handles, an abundance of embossed inserts with a contrasting body color, as well as large sills and wheel arches that bulge forward are clearly striking.

Interestingly, the doors are placed on rails hidden under the side glazing. Thanks to this, it was possible to equip the rear of the car with a seamless look, bypassing the installation of noticeable structures. And with the help of a safety latch, the left sliding door is not allowed to open randomly during the opening of the fuel tank cap. All doors have 360-degree seals to reduce wind and road noise. In addition to this, they allow you to isolate the car from debris or precipitation. The ride height is a fairly average 150 millimeters. And the novelty relies on 19-inch stylish “skating rinks”. 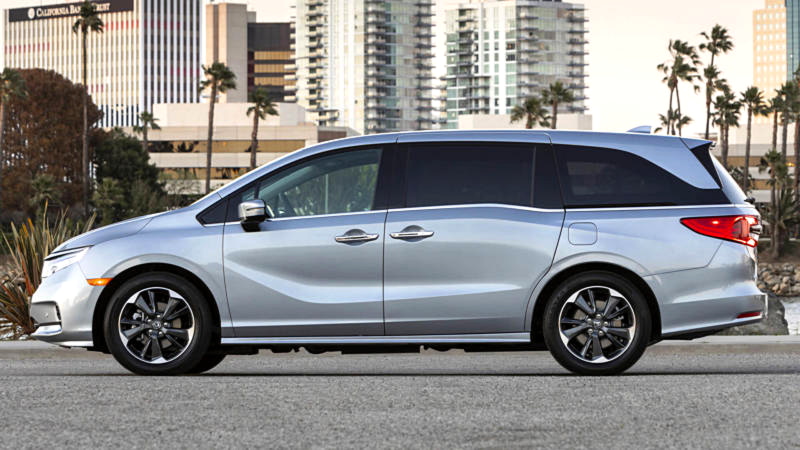 But as for the rear of the car, she was able to maintain her familiar appearance. There is a square configuration and almost no slope. Also, the design boasts a shortened visor where brake lights are placed, a massive luggage compartment window, non-standard overall optics, a chrome-plated “nameplate” of the company, as well as embossed elements that perform a decorative role. The rear body kit has a set of fog lights, a lot of relief and exhaust pipes. The body of the “Japanese” is equipped with revolutionary materials that improve overall rigidity, but reduce the weight of the car. This is reflected in the overall dynamics of the vehicle and durability.

There are plenty of rivals for the car even in the American market. For example, the competitor of the Honda Odyssey 2021 is the American Chrysler PacificaDodge Grand Caravan and Ford S-max, Japanese Toyota Alphard and toyota Sienna, Korean KIA Sedona, German Volkswagen Sharan, as well as the French Citroen C4 Picasso. The most direct competitors also have a maximum price tag of up to 50 thousand dollars. It seems that companies are afraid to cross the threshold of $50 thousand. Therefore, there is plenty to choose from, but you need to focus on your needs and tastes.

Minivans with hybrid power plants are a fairly wide branch of cars in the Japanese market. The table gives a comparative description of the hybrid Odyssey with competitors. 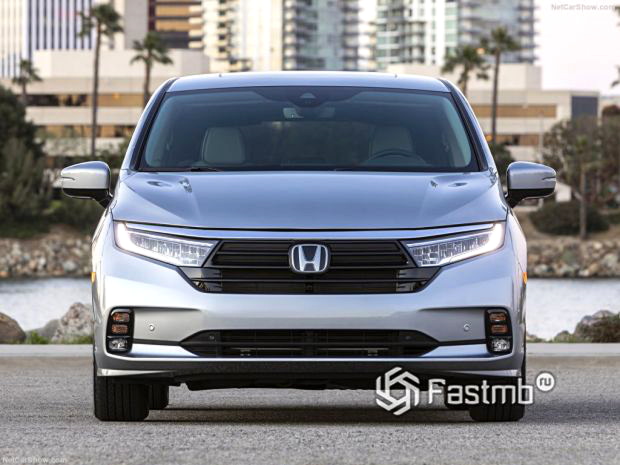 During the next update, the 2021 Honda Odyssey received a stylish exterior. A visual inspection of the vehicle reveals a number of reshaped but identical proportions and a recognizable exterior design concept. The body is filled with many relief accents with stepped and undulating performance. It is also decorated with chrome elements, redesigned headlights, new air intakes and other updates.

The front of the car, as before, is shortened, and the hood is set at a slight slope. This design improves visibility from the driver’s seat, regardless of the height of the person who drives the vehicle.

The front projection is distinguished by a short but massive hood with triangular recesses on the sides. The center of the front bumper has been redesigned with a large chrome strip that connects the air intake system and the headlights.

The first has a small size and the shape of a polygon. Also, the air intake sector is equipped with a grid with thin black lines and the logo of the automaker. The brand badge is chrome plated.

The headlights are triangular and angled, giving the exterior a more aggressive and bold look. To ensure that the road surface is illuminated as well as possible, manufacturers have provided LED optics equipment, regardless of the configuration.

The lower body kit takes up little space and has a light relief on the outside. On the design there are recesses for fog lights with a glossy edging, an additional air intake for more efficient cooling of the space under the hood, and many more embossed strokes. There are no plastic inserts. 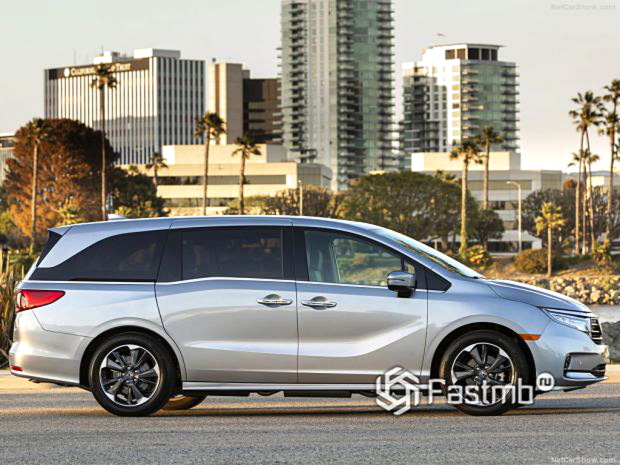 The profile of the 2021 Honda Odyssey looks stylish and modern. Most of the side view is taken up by a long strip of glazing, divided into sections by glossy black pillars. The figure is framed in chrome. Above are the original triangular rear-view mirrors and stylish turn signal repeaters. Identical elements are on the front wheel arches.

The main part of the profile is equipped with chrome door handles, a lot of embossed inserts with a contrasting body color, massive sills and wheel arches protruding forward.

The doors of the minivan are installed on rails hidden under the side glazing. This allows you to maintain a seamless appearance of the rear of the body without the installation of visible structures. The safety latch prevents the left sliding door from being accidentally opened when the fuel tank cap is opened.

All doors are equipped with 360 degree seals to reduce wind and road noise. They also isolate the car from debris or precipitation.

The stern of the Honda Odyssey 2021 has retained its former appearance. It has a square configuration and is almost without slope. A shortened visor is installed on the structure, where there are stop signals, a large trunk window, unusual headlights, a chrome-plated logo of the automaker and decorative relief elements.

On the rear body kit there is a set of foglights, an abundance of relief and pipes for the exhaust system. Visibility from the driver’s seat has been improved due to a number of innovations:

The body of the car uses revolutionary materials that increase the overall rigidity, but reduce the weight of the vehicle. This has a beneficial effect on the overall dynamics of the car and durability.

The 2021 Honda Odyssey comes with halogen factors, round beams and convex interior lighting for high-beam illumination. The optics kit can automatically turn off to protect the battery from discharge if the driver leaves the car, but forgets to turn off the light.

Low beam and high beam LED lights are exclusive to fairings. They guarantee balanced lighting at night and improved visibility in adverse weather conditions. The equipment consumes less electricity, which improves fuel efficiency and reduces the load on the power plant.