A car enthusiast tempted by foreign cars will certainly pay attention to a very similar appearance with a similar model, but only from KIA. On the one hand, it was possible to copy almost all the main elements of the body, overhangs, sloping roofs, stampings, but their own design innovations also played a role.

So, the “front end” welcomes with classic off-road style, with huge headlights spread along the wings. Radiator grille with classic emblem placed on a coarse mesh.

The bumper forms a single platform with the entire body kit, it is a powerful plastic case enveloping the entire perimeter. Around the edges planted kruglyashi protivotumanok. “Skirt” in addition to reliable plastic also receives aluminum protection.

Silhouette stands out in the first place just a huge plastic protective layer on the doors and sills. One would like to say that there are many off-road lovers among the owners of the Great Wall. By the way, the square style is most noticeable in the side part.

There is nothing remarkable behind, in principle, a single design line finds confirmation here. Square descent of the roof, smooth sidewalls, highlighted only by the rear optics. The bumper, taking into account the rest of the body kit, forms a single network and is similarly fastened with an aluminum “skirt” like the “front end”.

Oddly enough, the manufacturer foresaw that most owners would try to get into the mud, and the protective plastic was strengthened, now there is no need to repair or look for spare parts, the workmanship is very good. 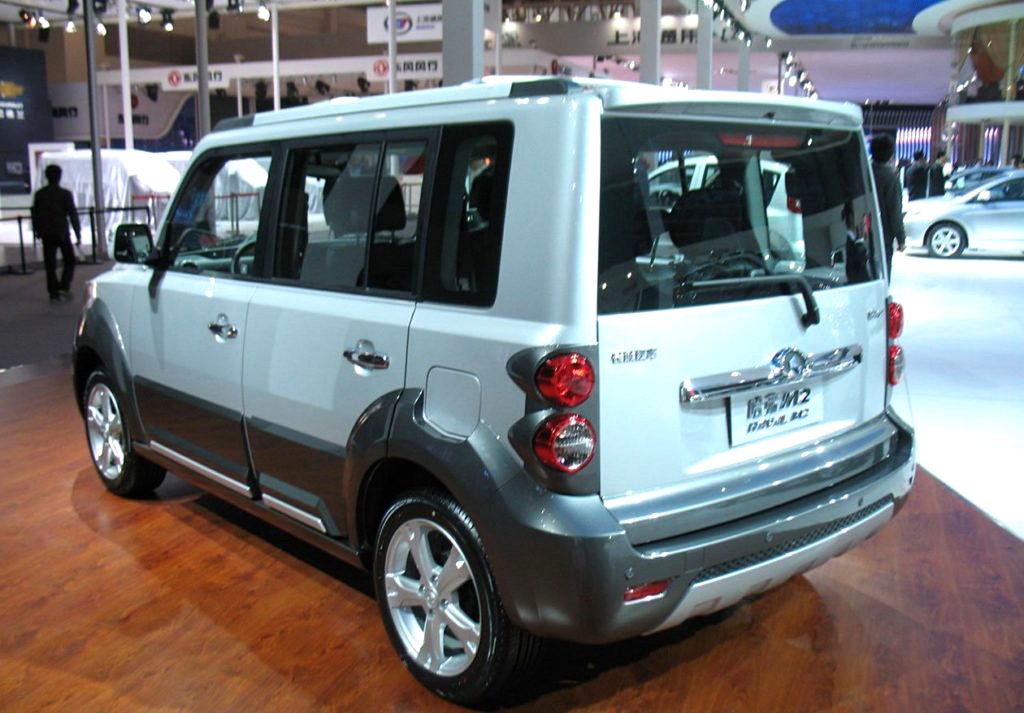 Great Wall M2 on the Russian market is presented in three trim levels. Even the “base” is provided with a quite worthy list of equipment, such as pillows, fog lights, full power accessories with heated mirrors, air conditioning, a lock, an immobilizer, a radio tape recorder, an adjustable steering column, and molding.

The cost of the initial version, from 400,000 rubles. More equipped modifications turned out to be a little more expensive, an average of 100,000 rubles. For them, in addition to the listed equipment, parking sensors, a new radio, leather interior, steering wheel, mirror drive, sunroof, climate control and a system for connecting telephones will be offered – this is the “Lux” equipment for the Great Wall model Hover M2.

First, on the high-speed ring – at the Dmitrovsky NAMI training ground, this is a wide road with smooth turns, very reminiscent of most highways near Moscow in the quality of the surface. Numerous cracks and potholes. We are accelerating. Transfers are included softly, clearly. Up to 70 km / h acceleration is very frisky. In city traffic, the dynamic capabilities of the car should be enough even with a margin. Then I switch to fourth gear – acceleration continues, smooth, confident without failures, but much slower. As a result, the speedometer arrow reached 100 km / h in 17 seconds, which is a little more than the value declared by the manufacturer (16 seconds).

At 110 km / h I turn on the fifth … It turns out it was not worth it. Further acceleration is difficult, I can barely get to 140 km / h. The gas pedal to the floor, but no further. Meanwhile, the maximum speed declared by the manufacturer is 158 km/h.

At 140 I try how the car obeys the steering wheel, the reactions are quick and predictable, but there is no special “drive”. Just good handling. Road M2 keeps well. I specifically drive through several larger potholes. No hint of breakdown, subsequent rocking or yaw. And so the first round ends. We stop and share our impressions with a colleague. “It’s a very soft car,” he says. “I don’t really feel the bumps.” I agree, the suspension really pleasantly surprised me. The noise in the cabin is also quite moderate, unless you open the hatch.

We’re going to the second round. We are accelerating. This time I keep the fourth gear almost to the red zone on the tachometer. 140 km / h – fifth. The M2 continues to pick up speed steadily, the speedometer needle goes past 160 km/h and freezes. Everything is the maximum. At the end of the lap, I brake hard, expecting the ABS to work, but no, just confident braking without locking up to a stop, and this is somewhere from 120 km / h.

What about those. the characteristics are all fair, its 158 km / h Hover M2 goes. Moreover, the car allows the driver to feel confident even at such extreme speeds.

When leaving the circle, I notice an overpass. Let’s take a look at what’s new below. Under the bottom, several surprises are immediately discovered. First, oil leaking from the box. Most likely oozing from under the drain nut. This is hardly a characteristic defect, but still not pleasant. Secondly, practically unprotected parking brake mechanisms, dirt and aggressive environments may well damage them. And finally, very low-lying levers in an independent front suspension – it’s better not to get into a rut, the distance from the ground to the rear differential housing and lower levers is slightly more than that of an average passenger car.

And yet, since the car is declared as a crossover, we go to the “ground”. The ring of “flat” primer at the training ground is 14 km of a wide variety of off-road types. It all starts with a dry rocky road. M2 runs along it, not particularly noticing the stones and holes. However, the faster, the less shakes. But at low speeds, movement on such a primer cannot be called comfortable. Almost the same applies to the section of the road paved with cobblestones.

Then the road goes down, puddles and mud begin. The Hover M2 has a leading front axle, the rear one is connected through a viscous coupling only in case of slipping of the front wheels. Such a design, as a rule, does not allow long-term slippage, the viscous coupling overheats, after which it is turned off, and the car remains on only one front-wheel drive. It is better not to get stuck – it will be problematic to get out without outside help. However, even in deep mud, the M2 felt clearly in its element. In second gear, he drove through slippery obstacles with almost no slip. Stopping and starting off in a puddle also did not cause problems. As soon as the front wheels broke into axle boxes, the rear axle was gently connected, and the car continued to move.

However, further on, the road narrowed to a forest track, although not too deep, but which turned out to be insurmountable for the Hover M2. Every now and then he clings to the soil with the crankcase of the rear axle and cuts off the earthen sides with levers. It was not so easy to get out of the wet grooves in order to try to continue the route “to the floor of the track”, the type of all-wheel drive affected. The rear axle is connected with a noticeable delay, the front wheels already have time to pick up the speed of rotation and only helplessly grind the wet ground, and the rear ones push the car forward along the track.

As a result, it was decided that for the urban crossover, which the M2 is, it is not shameful to retreat before the track – it was not created for that.