Chevrolet Volt new generation slightly increased in size compared to its predecessor, its overall dimensions are: length 4582 mm, wheelbase 2694 mm, width 1809 mm, height 1432 mm. The trunk does not differ in large dimensions, only 301 liters of empty space for your things. Despite the increase in size, the car did not gain weight, this was achieved by lightening both electric motors by 45 kilograms, and the battery managed to lose another 9 kilograms by reducing energy cells, there are now 192 of them instead of 288, but this did not entail a decrease in capacity , thanks to innovative technologies, it has only increased from 17.1 to 18.4 kilowatt-hours.

As for the technical characteristics of the Chevrolet Volt, the second generation got the Voltec hybrid power plant. It includes a gasoline engine and two electric motors. One of them is a motor generator. And speaking of a gasoline power plant, it is used to recharge the battery. This is a 1.5-liter 4-cylinder internal combustion engine equipped with direct fuel injection technology, as well as variable valve timing technology.

As a result, the power plant generates 102 horsepower (previously it was 16 “horses” less). Chevrolet Volt consumption varies within 6.9 liters for every 100 kilometers in combined mode. When the two “engines” work together, the total fuel consumption will be less. But the engineers decided not to increase the main electrical installation in terms of power.

But increased torque from 370 to 398 Nm. If we talk about the motor-generator, its power was reduced to 61 horsepower. Acceleration of the Chevrolet Volt from standstill to the first “hundred” of kilometers takes 8.5 seconds, and the speed limit does not exceed 157 kilometers per hour.

The electric motors of the Chevrolet Volt are powered by the latest lithium-ion battery. It was also developed by specialists from LG Chem. This option is more suitable just for full-fledged electric cars than for hybrid versions.

Its lightweight design boasts fewer cells (192 versus 288), but the capacity has increased from 17.1 to 18.4 kWh. Thanks to such innovations and a new power unit, the Americans managed to improve the range of the Chevrolet Volt to 80 km, if only one electric traction is used.

If the gasoline power unit works additionally, the distance will increase to 676 kilometers. A full charge of the Chevrolet Volt takes 4 and a half hours.

With the release of the new generation Chevrolet Volt 2, the American hatchback was equipped with a more rigid body that received a reinforced frame. Not without a high content of high-strength steel and zones of programmable deformation in front. As for the suspension, it has not undergone major changes. As before, the front end received an independent suspension with McPherson struts and an anti-roll bar. 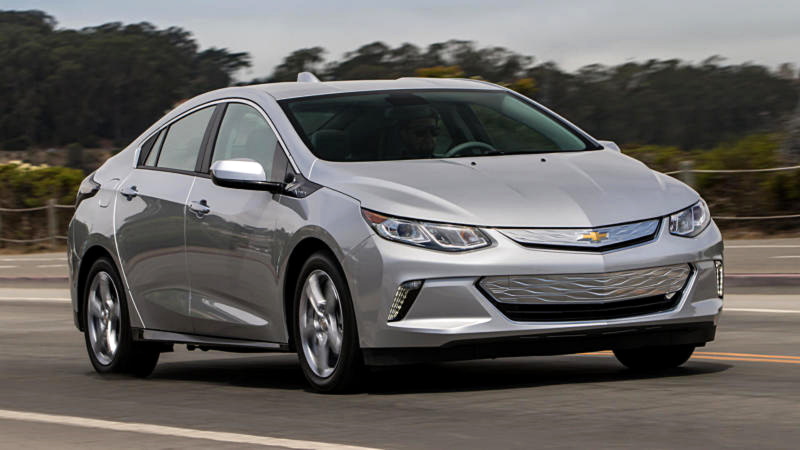 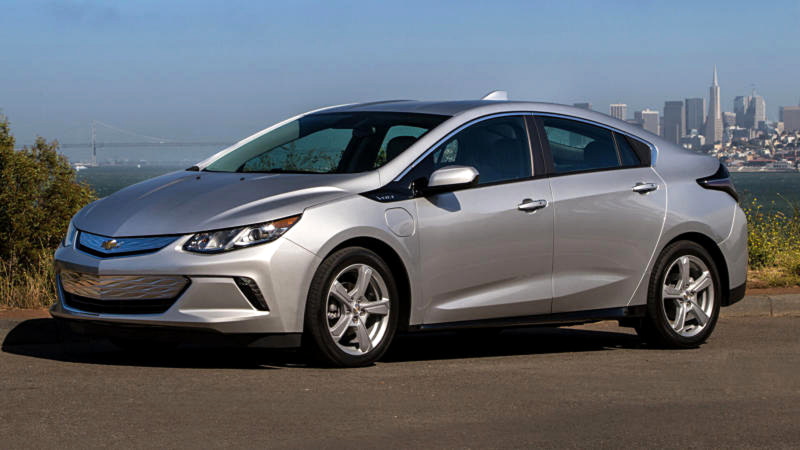 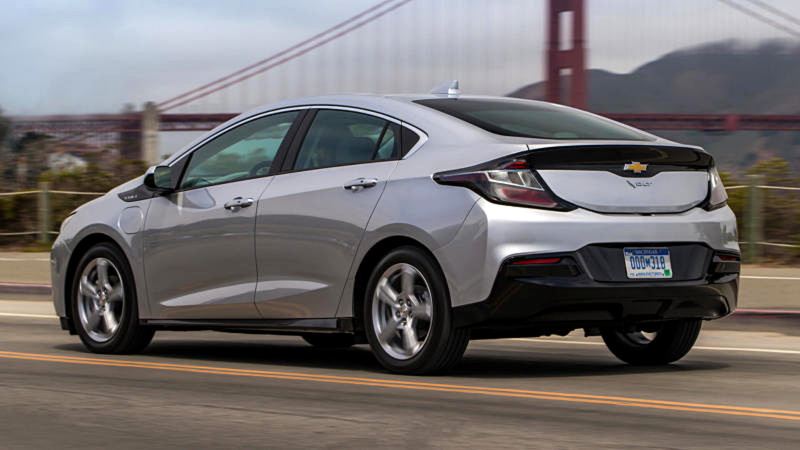 Behind is a semi-independent suspension with a torsion beam. Thanks to the rack and pinion steering and electromechanical amplifier, the machine is controlled quite easily. It has several modes of operation. The braking system boasts disc devices on all wheels (front ventilated).

Despite the more rigid body structure of the 2nd generation and the more capacious Chevrolet Volt batteries, the Americans managed to reduce the total weight of the car by 114 kg.

It is important to note that the bodywork has a large number of preprogrammed crumple zones that provide reduced impact force in a collision. In addition to this, when designing, specialists used better and stronger grades of steel. Thanks to this, it was possible to increase the overall torsional rigidity of the body.

Chevy is based on the Delta II, the same platform that was used to create the Chevrolet Cruze. The battery is a power body structure, and it is located in a special subframe located under the floor.

Both electric motors, a generator and a planetary gear are arranged in a common assembly. The car has MacPherson-front semi-independent rear suspension. Like all electric models, the Chevy is more expensive than its gas cousin.

The price of Chevrolet Volt 2017 for Russians reaches 2 million rubles and hardly go any lower. This amount is enough to buy a “special series” Mercedes E-class. And then there’s the hatchback. Why are they willing to buy it? 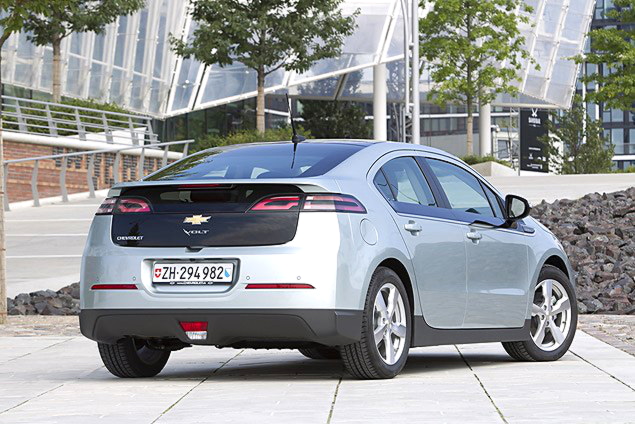 It is clear that the electric “things” are an expensive pleasure. Moreover, if Europe and the United States are interested in the distribution of electric vehicles and the state provides significant funds for their purchase, then, unfortunately, everything is not so with us. For our drivers, everything is based on ephemeral savings and environmental enthusiasm. And also on the aesthetic component. And in this sense, the Chevy Volt will not find many equals. 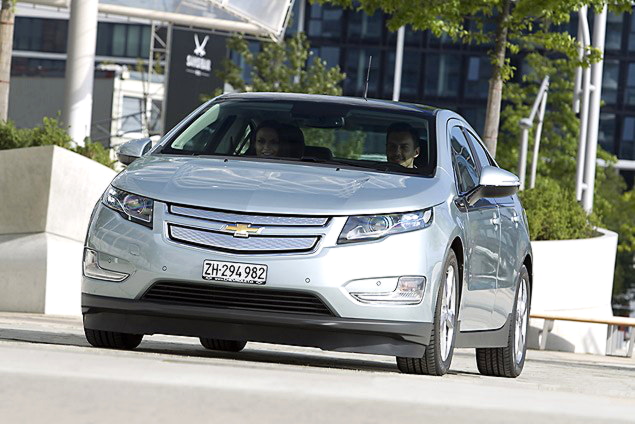 Type and arrangement of the hybrid plant

As a power plant, the development of General Motors – the Voltec architecture is used. It includes: two electric motors, an internal combustion engine, a battery, a set of planetary gears. The main traction force falls on the electric motor. The gasoline unit acts as a generator, generating the necessary energy.

In other words, it keeps the electric motor running, increasing the overall mileage of the plug-in hybrid. Torque control is assigned to the variator.

The total power of the hybrid power plant is 180 hp.

Important! It is worth noting that the Volt is more of an electric car than a hybrid. This is how it is considered in many countries when transported through customs.

This question always worries when an electric car is considered. For Volt, this is from 50 kilometers to 80. But there is also an internal combustion engine, which will always support you in a “difficult moment” when energy runs out. There is one trick here: even when charging is over, the gasoline engine does not directly rotate the wheels.

Its task is to turn the generator, the charge from which is supplied to the battery, i.e. petrol 1.4 liter engine, working per minute at a speed of up to 320 (low), consumes a minimum of fuel, and the power reserve brings up to 500 km! 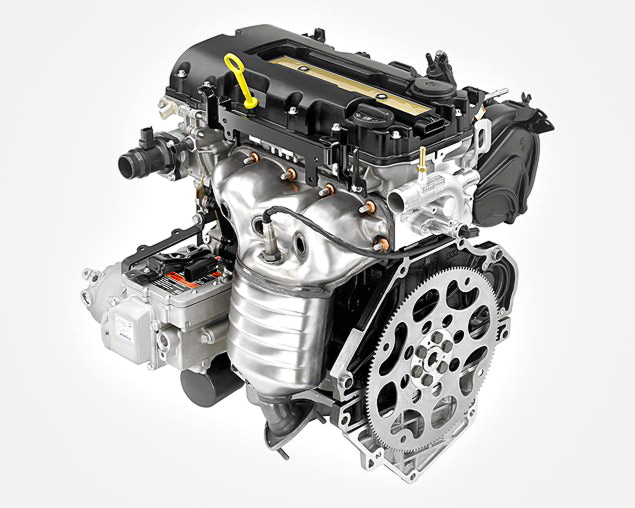 In terms of dimensions, the front-wheel drive Volt, designed for four riders, just falls into this category (length – 4404width – 1 798height – 1430 mm). Its chassis is also quite traditional for the “C” class: MacPherson strut in front, twisted beam in the back. At the same time Chevrolet Volt 86 mm shorter Honda Civic Sedan at the same height and 48 mm wider. And its base (2685 mm) by 85 mm morethan Toyota Corolla, and 25 less “Hondacivik”.

After the run 60 kmduring which the life of the battery is supported by regeneration during braking, is connected 1.4 liter internal combustion engine. It is intended only to recharge the battery, therefore it is “downgraded” to a motor-generator. It works according to the Flexible-Fuel technology on a mixture of denatured ethyl alcohol obtained from grain (70 to 85%) with gasoline. This is the so-called E85 fuel, popular in the agricultural states of the midwestern United States. It has a high octane ratingup to 105) and reduced by 20% the content of harmful impurities in the exhaust.

For the Chevrolet Volt, a set of systems is provided to ensure the safety of the driver and passengers.

The note. In the initial configuration, additional technologies can be installed for a fee.

Advantages of the model

Of the advantages of the Chevrolet Volt, it is worth noting: Fuel economyDynamicsDesignReliability

Of the breakdowns, it is worth noting the bearing of the electric motor, which begins to knock. This is annoying, but not critical. The weak point of the Volt is a complex transmission, the repair of which is time-consuming and expensive.