In our market, the first generation Chevrolet Spark was produced under the name Daewoo Matiz. The history of this model began in 1998. The Italian company Fiat decided to contact the design studio Giorgetto Giugiaro, which many know as Italdesign, with a request to create the appearance of a compact A-class car. However, Fiat was not satisfied with the finished sketches, so they were sold to the Korean company Daewoo.

In turn, a group of Korean engineers did not think for a long time. They decided to take the Tico, which had been in production since 1991, give it a new look and start making it. As a result, they decided to call the car Daewoo Matiz. However, in 2001, the Daewoo company was declared bankrupt, and the Americans from General Motors bought out a controlling stake.

Production of Daewoo Matiz was continued. In some European countries and Asia, the car was sold as the Chevrolet Matiz. After 2005, the car was produced in a restyled version, which did not seriously affect it, and since 2006, the compact model began to be sold in Europe and Russia under the name Chevrolet Spark.

As for the Daewoo Matiz model, it was produced under its own name until 2015. And the Chevrolet Spark became a kind of separate and independent model, which was constantly updated in subsequent years. That’s right, a full-fledged 2nd generation Chevrolet Spark model appeared.

The model has an outdated design of the exterior and interior. The hatchback is based on the Ravon R2 body, which was previously built on the basis of the Daewoo Matiz. That is why many motorists consider the performance of the car obsolete. As part of the subcompact segment, the 2023 Chevrolet Spark has a classic barrel shape. The car received a very short front part, in which large headlights, a miniature hood cover and a small radiator grill stand out. Fog lights and a small air intake are built into the front bumper of the hatchback. The rear of the body received an almost vertical tailgate with large lanterns. The stern bumper is compact in size. You can also note the visual absence of rear door handles that are built into the pillars, which gives the impression that the hatchback has a three-door body layout.

The interior of the model is quite simple, not involving modern solutions. The interior decoration involves inexpensive, but sufficiently high-quality plastic, which does not emit extraneous squeaks and noises. Inside the hatchback there is a dashboard with one “well”, which displays the speed mode of the car. Next to it there is a miniature on-board computer screen, which displays various information about the parameters of the embedded systems. You can also note the compactness in the performance of the transmission tunnel between the front seats of the car. He received a classic gear selector, two cup holders and a mechanical parking brake lever.

The inside is much better. A 3-spoke multifunctional steering wheel is placed in front of the driver, which can be adjusted in height and depth. Moreover, the basic versions allow you to do this mechanically, expensive versions – using an electric drive. Next, there was a place for the dashboard, which has a large arrow speedometer in the center, a slightly smaller tachometer and a small monochrome display of the “board computer”.

As for the “tidy” itself, it stands out for its informativeness and is easy to read at any time of the day. The central panel recognizes the overall style of the brand. Either way, the centerpiece has a 7-inch entertainment center touchscreen. Android Auto and Apple CarPlay were chosen as the basis for the system. Bluetooth, Wi-Fi hotspot, and 4G LTE mobile communications are provided. 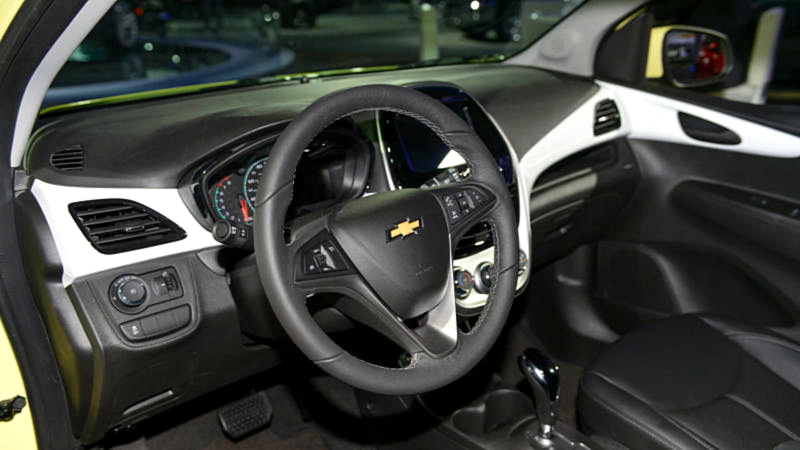 Under it was placed a small panel that allows you to control the “music” and mobile communications. Next come the ventilation system deflectors and the “climate” panel, which initially looks boring, but the lion’s share of the control was transferred to the main screen. The whole thing is completed by a small recess designed for recharging from a USB port and a 12V outlet.

Despite the inconspicuous finishing materials of the 4th generation Chevrolet Spark, the decoration looks quite solid thanks to a large amount of glossy plastic and aluminum inserts.

The central tunnel of the 4th generation Chevrolet Spark looks unusual. It is equipped with a mechanical handbrake, two cup holders, a gearshift lever, and an armrest (as a separate option). The car can accommodate 4 or 5 people. The seats installed in front are equipped with a more sporty shape than in the previous family. I am also pleased with the presence of good lateral support, high head restraints and a comfortable fit.

The front seats can be adjusted mechanically or electronically. Not without heating and memory seats for 3 modes. 3 passengers can sit on the second row, and the top options are suitable for 2 people. This is partly due to the presence of a cup holder and a small recess for small items, as well as recharging from a USB port. 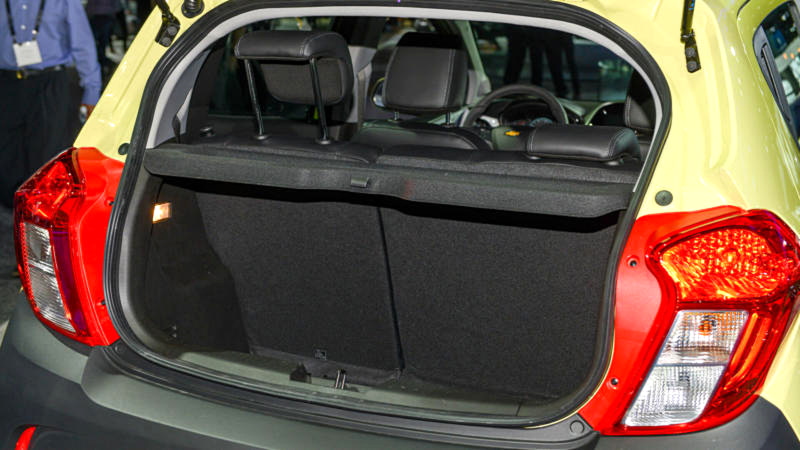 As for the upholstery material of the new 2020 Chevrolet Spark, there is plenty to choose from. Available in fabric or leather. Given the standards of the A-class, the car has a good trunk that can fit 313 liters of luggage. If you remove the backs of the second row of seats into a flat floor, you can “expand” the volume to 771 liters.

The car has the simplest possible suspension design. So, there are classic MacPherson struts in front, and a torsion beam in the back. The car is driven by a four-cylinder 1.2-liter power unit with a maximum performance of 85 “horses” (113 N * m of thrust). Together with this engine, a four-speed automatic transmission works in tandem. The drive of the car can be exclusively front. Despite such indicators, this internal combustion engine consumes not so little fuel – 6.2 liters of gasoline per 100 kilometers. From zero to the first “weave” hatchback accelerates in just 12.4 seconds. In general, the characteristics of the model correspond to its price.

The machine has very compact dimensions. The length of the body of this hatchback is 3.64 m, the width is 1.597 m, and the height is 1.522 m. The weight of this car is slightly more than one ton. The interior of the model is quite crowded, especially on the second row, because there is a distance of 2.3 meters between the front and rear axles. The car has a small small trunk – only 170 liters, but if you fold the rear row of seats, the volume increases to 568 liters. Spark is designed specifically for use in the city, as indicated by its small size and ground clearance of 13.5 cm.

Thanks to its compact size and the presence of electric power steering, the new 2023 Chevrolet Spark is easy and even too easy to drive. At the same time, the lack of a full-fledged set of electronic assistants, as well as low weight, do not allow the driver to be sure that the car will not fall off the path or go into a skid during maneuvers on the road. Naturally, the compact dimensions and low ground clearance do not allow us to count on the fact that the car will be able to overcome serious obstacles. Its maximum is potholes and small bumps. Even driving on dirt roads for a compact hatchback can be an impossible task.