It is important to immediately understand for yourself that we have a budget car in front of us, so it’s clearly not worth expecting something big from it inside. The quality of the plastic could be better, but again, remembering the cost of the Chevrolet Lacetti, all questions disappear. The interior has two niches for small items on the center console, an armrest, a stove, and air conditioning.

In front of the driver of the Chevrolet Lacetti is a four-spoke steering wheel. Next, you can see the usual dashboard, which has analog instruments and an on-board computer. The “tidy” itself is read well, does not tire in the dark. More expensive equipment can boast of the “cruise” keys on the steering wheel. The center console is equipped with a clock at the very top.

Next, the company’s engineers placed a radio and a selector that allows you to control the stove and air conditioning. Some versions boast a display that shows the selected settings. You can also notice pseudo-metal inserts on the dashboard, which look archaic.

However, the assembly of the cabin as a whole can be called neat, and the gaps between the elements are minimal. The quality of the seats is mediocre, but can accommodate a driver with any build and height.

If we talk about spaciousness, it is at an acceptable level. There is enough free space, but if there was more, it would be better. The rear sofa can accommodate three adults who will not feel the lack of free space in the legs and overhead. The luggage compartment in this regard is normal and you can load a lot of things into it. It received a volume of 405 liters.

It is distinguished by a wide opening and a convenient shape that facilitates the transportation of fairly large items. The rear sofa can be removed, which will already provide 1,225 liters of usable space. You can’t call it a luxury car, but if you need an inexpensive and relatively normal car for the city, the Lacetti is best if you don’t have much money.

All configurations of the Lacetti station wagon are represented by two types of gearboxes: manual and automatic to choose from. The most reliable and durable is the 5-speed classic German-designed manual transmission layout, which is also installed on various models of Opel and Volkswagen. The warranty resource of such a box is 150 thousand km, it is maintainable and inexpensive to maintain. The backstage travel is clear, without jerks, has a small stroke, which gives excellent gear shifting dynamics comparable to the sports mode. Possible problems are caused by a clutch slave cylinder with a release mechanism, which, due to its design features, is one piece, including the release bearing. Most often, a leak appears in the cylinder after 100 km of run during the off-season, when large temperature drops occur with sub-zero temperatures.

Automatic transmissions on the Lacetti are presented in a wider range: from the four-speed Aisin A81-40LE to five and six-speed units, depending on the power of the engine type and configuration. They are less reliable than mechanics, but more economical and can last 200-250 thousand kilometers before major repairs. The operation of an automatic transmission involves frequent replacement of transmission oil and a careful driving style, its repair and replacement are more expensive compared to mechanics.

Automatic transmissions of the Aisin A series are the most common boxes among this class of cars, however, many owners choose the mechanics for the Lacetti station wagon: according to statistics, the mileage resource on any station wagon with a gun is less than on a sedan or hatchback.

This is due to the greater mass of the station wagon – the transmission carries an increased load, the mileage resource, as a rule, is reduced by 20%.

Typical automatic transmission problems on the Lacetti station wagon: unbalance of the gear control cable, possible failure of one or more satellites after 60-80 thousand kilometers, wear of bearings or drive shaft gears. This is manifested by skipping gears, shifting jerks, delays, which are accompanied by noise, a hum in the left side of the wheel arch and vibration on the steering wheel. 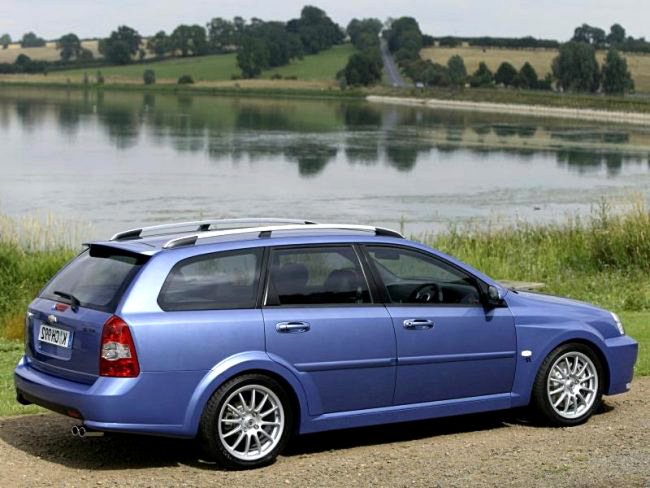 Since such cars are quite common on our roads, many Chevrolet Lacetti owners seek to somehow improve or decorate their car so that it stands out from the crowd. Some immediately start with tuning the power unit. Chip tuning Chevrolet Lacetti can begin with engine diagnostics and determining its real performance. Next, the program that was installed at the factory is read from the electronic control unit.

Then they change it and, already in an updated form, write it back to the computer. Thanks to this procedure, power is increased by 10%, and gasoline consumption is reduced by 5-8%. But there are special firmware that allow you to save even more on fuel, but you should not expect a “nimble” ride in this case.

You can also use the technical tuning of the car. For example, some replace the piston group with a lightweight one, grind the manifold, install different camshafts on the motor for finer tuning. With the help of a filter of zero resistance, it is possible to equip the engine with the required amount of oxygen.

Some owners of the Chevrolet Lacetti station wagon, sedan and hatchback create the so-called “spider” in the exhaust system – a system of pipes of complex configuration and install a straight-through muffler. Due to the increased power, it is worth changing something in the gearbox. You can use reinforced baskets and a clutch disc. It is important to pay attention to the braking system.

The Chevrolet Lacetti sedan has been featured in Top Gear’s “Star in a Budget Car” feature since the 2006 spring season. And in May 2006, presenter Jeremy Clarkson noted that the Lacetti was more agile on the Top Gear range than the Suzuki Liana, and about 4 seconds faster lapped.

If you want to change only the exterior, you can use tuning the appearance of the Chevrolet Lacetti. There are motorists who change the body. For example, they install a hood cover with air intakes, roof pits, gills on the wings, and so on. Do not underestimate the aerodynamic body kits, designed not only to change the exterior of the car, but also to improve its handling.

Some modify the suspension, install body kits with a spoiler. Decorating the appearance of the car will also be stylish “skating rinks” of a larger radius and low-profile tires. If funds allow, you can pay attention to the new optics and grille.

Improving the interior is also worth it, especially if you value comfort and coziness. The simplest thing is to buy rugs, covers and more. But if you wish, you can significantly change the interior of the Chevrolet Lacetti. The seats are upholstered with more expensive and high-quality fabrics or leather. You can install new seats from famous sports brands, such as Recaro or Sparko. They also install a sports steering wheel, which has a smaller diameter and is better to lie in your hand.

It is worth thinking about working out interior lighting, which will also increase the overall level of comfort. Particular attention can be paid to the illumination of the dashboard and organs. Thanks to the installed special door sills, this will not only decorate the car, but also simplify the process of boarding / disembarking.

For music lovers, it is important to pay attention to replacing the head unit with a new, better one. The center console is a great display, and the luggage compartment will accommodate an amplifier and a subwoofer. Experts still advise to work on soundproofing.

Options and prices in the secondary market

On the secondary market in Russia, you can find Lacetti models in a more expensive configuration, which were supplied to Europe. They are equipped with side airbags for the driver and passengers, front and rear ventilated disc brake systems, additional seat belt pretensioners (ISOFix) are installed on the front seats, and the interior trim is made of natural materials (eco leather, wood). 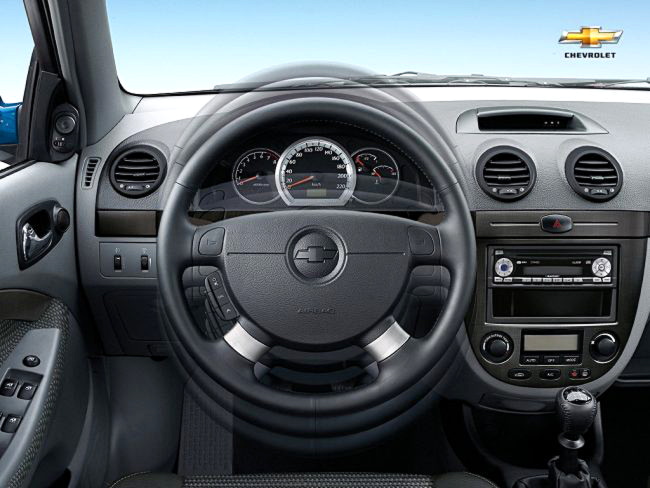 The interior design of the Lacetti station wagon differs from sedans and hatchbacks, where a more conservative style is maintained. Here, a more expensive finish, there are additional aluminum moldings and natural wood veneer inserts.

Among the used station wagons, the Lacetti remains the leader in sales in Russia – the price of models from 2006 starts at 220 thousand rubles, while the margin of safety for such a car is quite high.