The appearance of the “five” Chevrolet Camaro amazingly combines the own features of the legendary car, which was produced 40 years ago, and today’s style of modern sporting qualities that are inherent in “muscle cars”. The model is fraught with aggressiveness, rapacity and muscularity.

Its spectacular appearance is reinforced by the non-standard shape of the rear fenders, which turned out to be chopped, and an LED lighting system. If you take the style of the fifth Chevrolet, you immediately understand that the car company decided to follow the first generation, and not copy the “slickness” of the 4th and 3rd generation.

This is eloquently evidenced by the elongated hood and radiator grille with large honeycombs, which have a rectangular shape, the gaze of a real predator, which can be seen by paying attention to the headlights, and wide wheel rims.

The side struts, which were installed in the middle, were made in such a way as to increase body rigidity, but they are almost not conspicuous. This creates the illusion of a hard convertible roof. As a separate option, you can order a glass roof, which will have an electric drive. 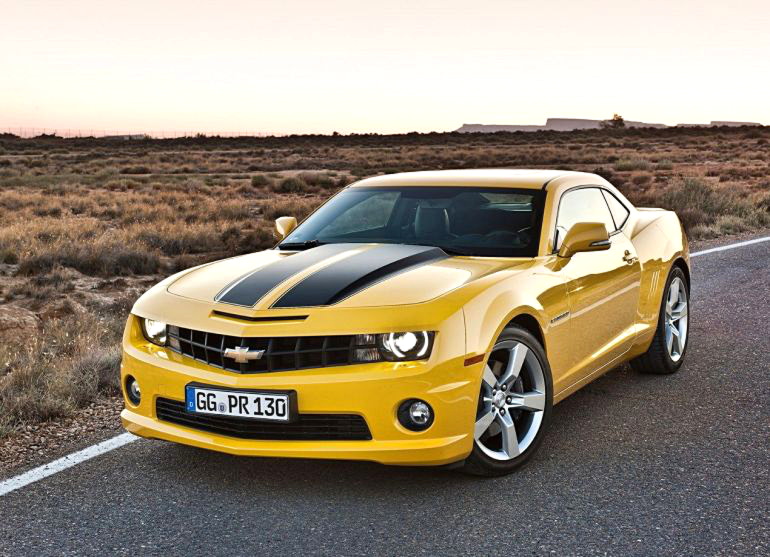 True, for this option you will have to pay about 50,000 rubles. And thanks to the fact that the car was used in the world-famous Transformers movie, Chevrolet Camaro was able to increase demand for itself, not only in America, but around the world.

The wheelbase of the powerful monster is 2,852 mm, and the level of ground clearance is within the value of 118–122 mm. This clearance allows you to feel confident at high speeds and when cornering. Interestingly, the “open” version of the Convertible is slightly larger: 5 mm long and 12 mm high, and the ride height is reduced by 3 mm.

To put it bluntly, the interior of the 5th generation Chevrolet Camaro has a spartan look to the cabin. The steering wheel itself is leather-wrapped. If you take the option with an automatic transmission, the shift paddles have been mounted on the steering wheel and rotate with it, which makes it easier to shift gears when turning.

Paying attention to the center console, you can see that it has space notes, and its real decoration is the air conditioner settings box, which looks quite stylish (climate control is not even optional). 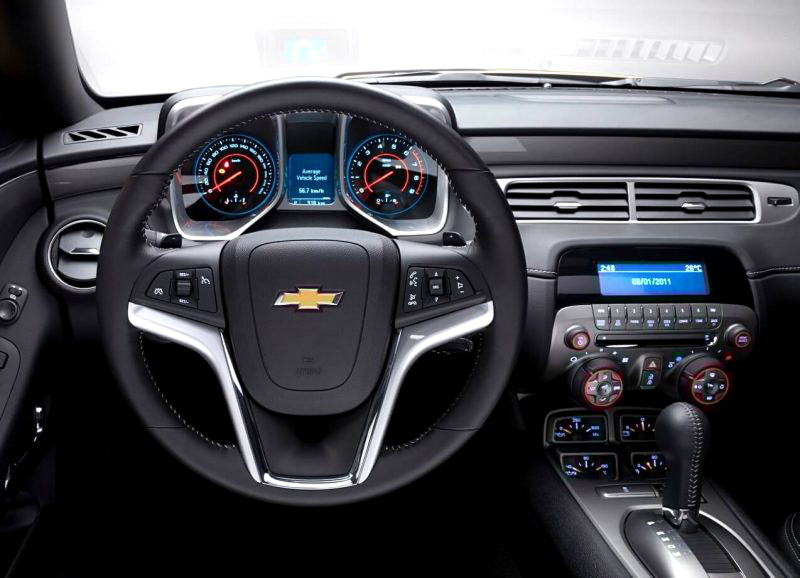 Among the advantages of more expensive modifications, one can single out the presence of auxiliary devices, which are designed to show important information. The center console provides only a small monochrome screen.

I am also pleased with the presence of active head restraints and heating functions for the seats installed in front. The back row can be folded. If it’s more than comfortable to sit in front, then only children or short adults can comfortably sit in the back seats. This is due to the limitation of the supply of free space in length and height. 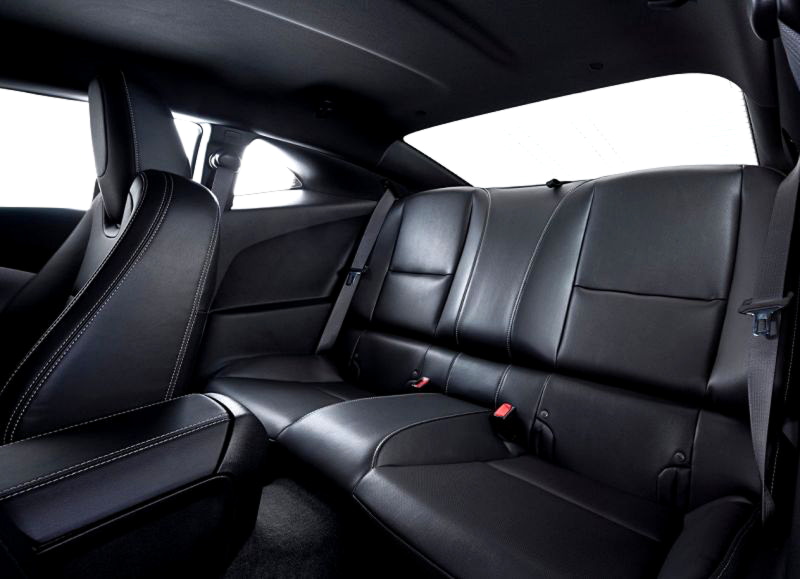 By the way, for children, the designers have provided special mounts for Isofix child seats. The speaker system has a power of 245 W with an amplifier, and also supports AM/FM/CD/MP3/AUX/USB and Bluetooth.

Also inside the American car you can find cruise control, air conditioning, installed rear camera and tire pressure sensors. The luggage compartment of an American is not a record one, which, in principle, is not so important, for the transportation of goods there are station wagons, crossovers and trucks, after all.

Inside the fifth-generation Chevrolet Camaro, they also decided to follow the retro style, but they did everything using modern materials and technologies. First of all, it touched the driver’s seat. The dashboard of the 5th generation was divided into 3 separate areas: on the left side – the speedometer, in the center – the on-board computer display, on the right side – the engine speed sensor.

Interestingly, the designers decided to design the center console in a retro style. The upper area was occupied by an audio and climate system, and 4 devices found their places below, which showed the temperature of the power unit, how much fuel was left, and so on. Hard and inexpensive plastic is everywhere.

Armchairs decided to be made of solid leather. Pleasantly pleased with the multifunctional steering wheel borrowed from the Cruise and the color screen of the MyLink multimedia system. Although the seats in the “American” are comfortable and tight, they do not have good lateral support.

The new Camaro received a classic squat body with a wave-shaped hood and massive wheel arches. The American muscle car is equipped with a narrow grille, combined with compact headlights and a lower air intake, which runs almost the entire surface of the front bumper. The Camaro also stands out due to the small side windows and the “littered” A-pillars, which provide good aerodynamic performance.

The stern of the muscle car also has a classic design. At the rear, a pronounced spoiler is provided, located above the two-section LED optics. Beneath it lies a ledge separating the upper part of the trunk from a large bumper with twin exhaust pipes spaced apart on the sides.

The interior of the American model is both simple and functional. The interior space is thought out in terms of driver comfort. One of the features of the cabin is that the central air intakes, reminiscent of jet engine nozzles, are located under the touch screen in close proximity to the transmission tunnel. The steering wheel has a soft grip and hides the original instrument panel with four dials.