It is easy to distinguish a new body from a model of the previous release at a glance. The asset of the novelty includes a number of elements of external decor copied from older models, which make it possible to show the car in the most advantageous and attractive appearance.

The high qualification of branded designers can be seen in the front part of the body, which meets the needs of drivers of different age categories. In the photo, the full face of the Chevrolet Aveo 2020 shows:

In the design of the bumper and body kit there are pronounced elements of sports style. This is a massive chrome-plated semi-perimeter of the lower air intake and a large format ventilation diffusers. The design of the front end skillfully uses the decorating properties of chrome plating, as well as the ribbed body relief.

Traditional for the entire model range, the manufacturer offers fog lighting shades in the list of functional and comfort-creating paid options.

In the profile projection, the simple and practical, at the same time elegant arrangement of the side panels attracts attention. In sight:

A positive perception of the rear side of the body is formed by an enlarged format of the rear sloping window, a raised and shortened luggage compartment lid supplemented with a spoiler, a three-tiered arrangement of massive lamp shades.

Against the general background, a wide bumper decorated with fog lights and a compact plastic body kit that performs protective functions looks inconspicuous.

Significantly increased the quality of finishing materials in the cabin. You can’t call her poor anymore. The novelty boasts a finish of fabric, plastic, metal and artificial leather, but all this here is of good quality. The driver and passengers will definitely appreciate it. You will also appreciate the modern multimedia system.

The center console of the new Chevrolet Aveo 2019 does not have a huge number of parts, which is only an advantage. Here you can see the compact screen of the entertainment center. It is surrounded on the sides and top by air ducts of the ventilation system. Not without several panels with analog keys responsible for setting options that affect the level of comfort. This includes seat heating, air conditioning, air conditioning, and more. 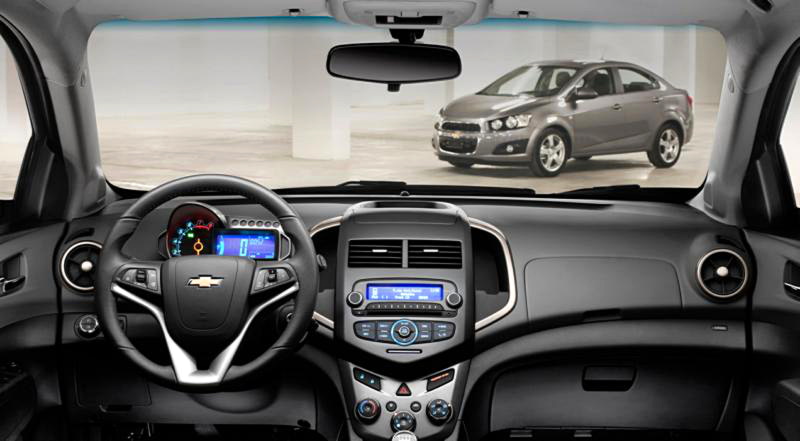 As for the tunnel, it turned out to be thin, but long. On it you can see a panel with connectors for accessories, a transmission switch, a handbrake. In addition, it has cup holders, pockets for things and an armrest that hides a rather deep glove box underneath.

Directly in front of the driver is a completely new steering wheel, which is now more equipped with a better and more pleasant finish of the “helm”. On the spokes, you can see a lot of keys with which you can easily interact with the entertainment center of the Chevrolet Aveo 2020 car.

Changed and “tidy”. In the center, the engineers decided to install a massive round-shaped speedometer, and on the sides of it they placed a tachometer and a “board computer” display. The seats have become softer and are equipped with better fabric. Those sitting in front received heated seats already in the initial version. Not without mechanical seat adjustments. Specialists were able to refine the lateral support.

In the back row, designed for 3 people, only two will sit comfortably. There is a reclining armrest and adjustable headrests. The sedan boasts a good trunk, designed for 502 liters (Chevrolet Aveo hatchback received 290 liters, and if you remove the backs – 653 liters). In the sedan, you can also remove the rear backrests, which can significantly increase usable space. Underground niche has tools and a small spare wheel.

In the updated version, the sedan received all the advantages of the GM Gamma II global front-wheel drive platform and a combined torsion bar suspension. The asset of the car with overall dimensions of 4.4 x 1.7 and 1.5 meters is a fairly comfortable chassis with a center distance of 2.4 meters and a ground clearance of 155 mm.

Fuel consumption is fixed at 5.9 and 7.1 liters per hundred mileage in mixed driving mode.

The test drive confirmed the starting and traction characteristics corresponding to the class of the car, well-coordinated interaction with mechanical and automatic transmissions.

Overview of the Chevrolet Aveo sedan from. frowningly friendly

A massive handle for a natural grip opens a light door, and an unusual and rather curious interior of the car appears before the eyes. In the form of a symmetrical front panel guesses the corporate resemblance to the older Cruze. Light plastic inserts flow from the dash to the door panels.

Plastic everywhere is hard, but it looks quite decent. Tidying is minimalist. Motorcycle design. However, it does not cause inconvenience when using. The large tachometer, although it glares in the sun, is always readable thanks to the large font. And the digital speedometer is far from new. Everything is clear, before your eyes. When a certain speed is reached, a prompt pops up about the need to switch. Interior build quality is good. I did not notice any “jambs”. Well, such design features as round ventilation nozzles are pleasing to the eye. 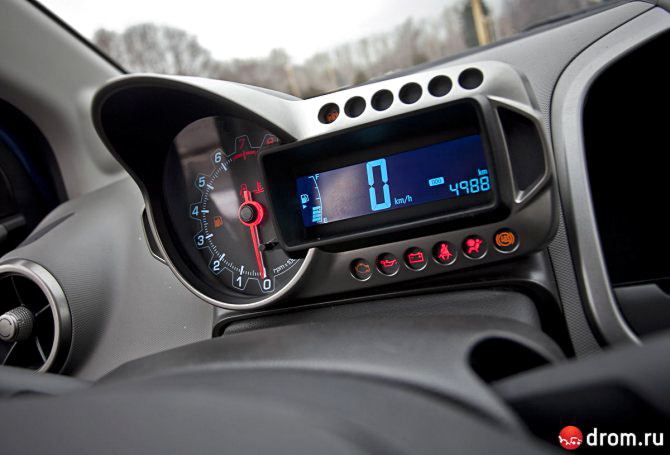 Our car is in the LT configuration with some options. There is air conditioning, but no climate control, there is a sunroof, but no foglights. But you can bring the phone to the audio speakers via Bluetooth, bring a “flash drive” or a player with music from home and connect it through the appropriate connectors.

The steering wheel is height and reach adjustable. The last parameter, however, could be a little more. It is a pity that the driver’s seat can not be lowered down. You have to slide in it a little. The seat itself is quite comfortable, and holds decently according to civil concepts.

Salon Aveo captivates with practicality. At the top of the center console are two large niches. Pleased with spacious door pockets. In the central tunnel there are two cup holders with latches for small containers. Yes, and a double glove compartment is convenient. Of course, here you can fold the backs of the rear seats (however, a floor with a step is formed in relation to the trunk). The only pity is that the creators did not provide the trunk lid with a handle for closing from the inside. 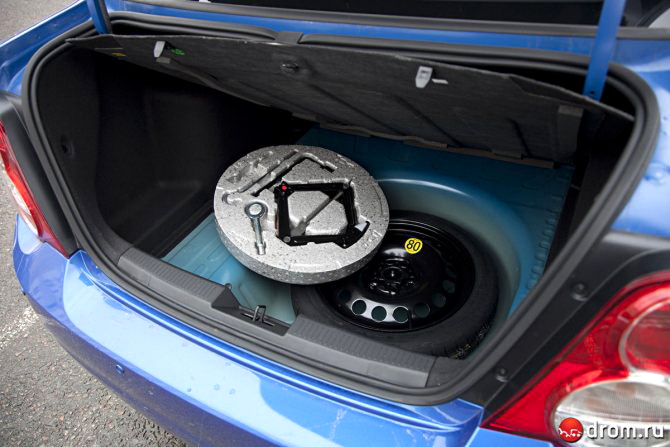 As for the back seat, there are no surprises here. Four adults (preferably not basketball players) is a reasonable limit for a car of this class. By himself, with a height of 189 cm, it was cramped to sit.

Unlike its Asian predecessors, the new Aveo doesn’t just look global. It is also built on the new global platform Gamma II, which served as the basis for a whole family of small GM cars – Italian, German, Korean. The front suspension is MacPherson strut, and the rear is a semi-independent torsion bar. True, the good old hydraulic booster lurks in the steering, but this is even good (as the test showed).

Aveo in Europe, for example, is equipped with a line of gasoline and diesel engines, but so far only cars with a 1.6-liter engine and 115 hp are offered to Russia. This is the Ecotec engine from Opel. Two gearboxes are offered – a 5-speed “mechanics” and a 6-speed “automatic”. The suspension of “our” Aveo has been adapted “for bad roads”. The car is assembled, like its predecessor, at the Avtotor plant in Kaliningrad. GM plans to transfer assembly production to Nizhny Novgorod to the GAZ plant. However, this will happen not earlier than the end of the current – the beginning of next years. 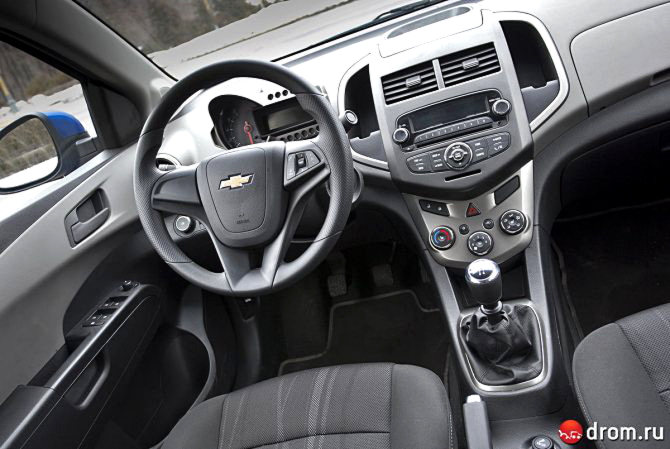 The new Chevrolet Aveo (T300) lost some of its aggressiveness in appearance during the update. At the same time, the car has become more respectable, which will undoubtedly appeal to the older consumer audience.

However, for those who want to stand out from the stream, the company has prepared a tuning package. The latter includes a low body kit, a massive front bumper with a protruding splitter and a large air intake section, as well as an exhaust pipe trim.

Inside the cabin, inexpensive, but fairly high-quality products are used, ergonomics are also not bad, there are several compartments for various little things. In more expensive trim levels, the dashboard is finished in 2 colors, as are door cards. The dashboard itself has a dashboard in the form of a Chevrolet Spark and a steering wheel that can be adjusted in height and reach, and a console in the center. The pluses that have appeared can be counted: 2 glove boxes, 2 AUX connectors and a USB slot, and optionally a climate system.

It is also worth mentioning the new My Link multimedia system with 7 inches. touch screen. There is a bluetooth, satellite navigator, which is controlled by voice. This was not the case in previous versions.

Which gasoline is more economical? A92 A95

Also, the equipment arsenal includes: an ABS structure, a power steering wheel, an air conditioning system with an air filter.

This car is installed on the Gamma 2 platform, which is used in the Chevrolet Spark, and after the platform will be installed on other budget GM cars. 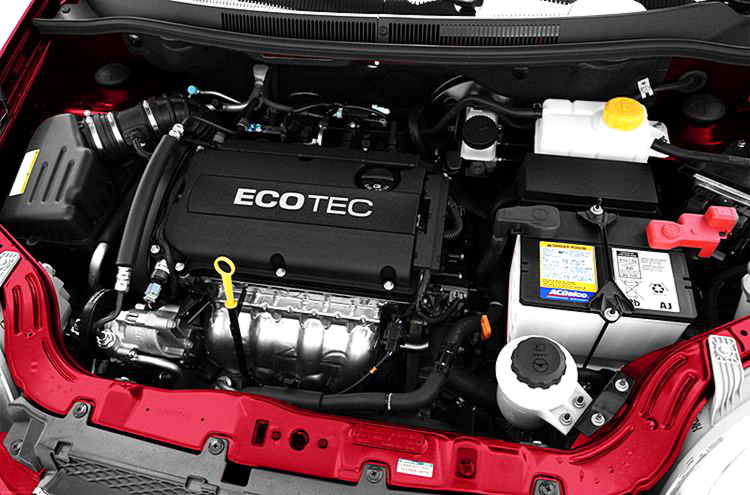 Front suspension – McFerson struts, rear – torsion beam. But, thanks to the latest subframe, with the help of which changes in the steering settings are made, this car is moving along the track perfectly.

The car turned out to be good, with excellent steering, normally overcomes turns, on a straight line it is also unique. It should not be kept like the previous model (but there are still small rolls – they are minimal). The driver will be pleased with the excellent work of the 5-speed manual gearbox, but you can also choose with a 6-band “automatic”. The developers of the concern did a good job and created a decent car with sporty features.

Also, the sound insulation has been improved somewhat, the car has an email. power steering, braking system with ABS and EBD, ESP – stabilization dynamics, and ASR traction control. So, consider the engines:

The concern also announced the possibility of installing a 1.3-liter turbodiesel (from 75 to 95 hp). Since this year, our car is equipped with only one version of the engine – 1.6 liters. 115 l. forces.