The tailgate of the “seven” Tiggo Pro is equipped with an electric drive, due to which it can open automatically if you approach it with a key fob, you do not need to make any manipulations with your foot under the bottom of the car.

The opening level of the sash is high, and the lifting is carried out quickly. 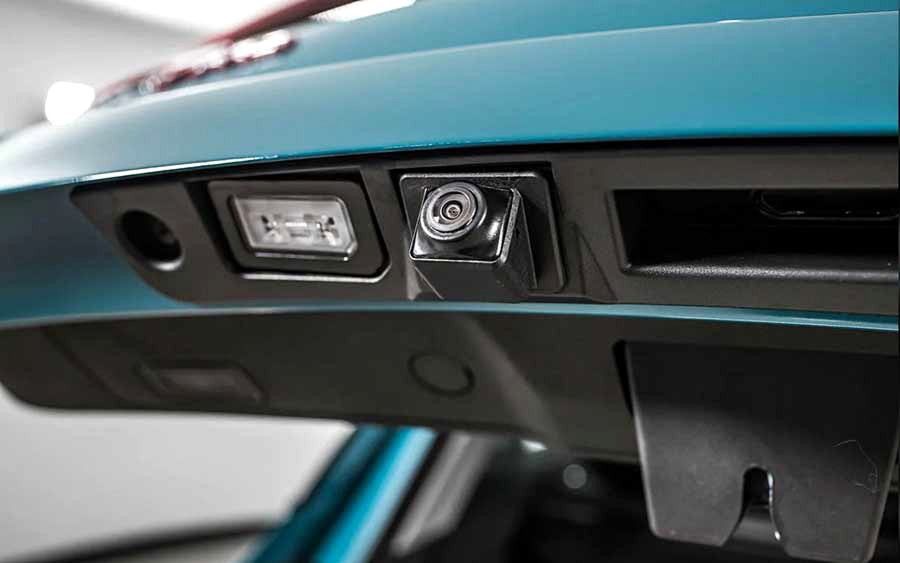 Also, the door can be opened mechanically using a button located in the center just above the rear license plate.

The main parameters of the luggage compartment: 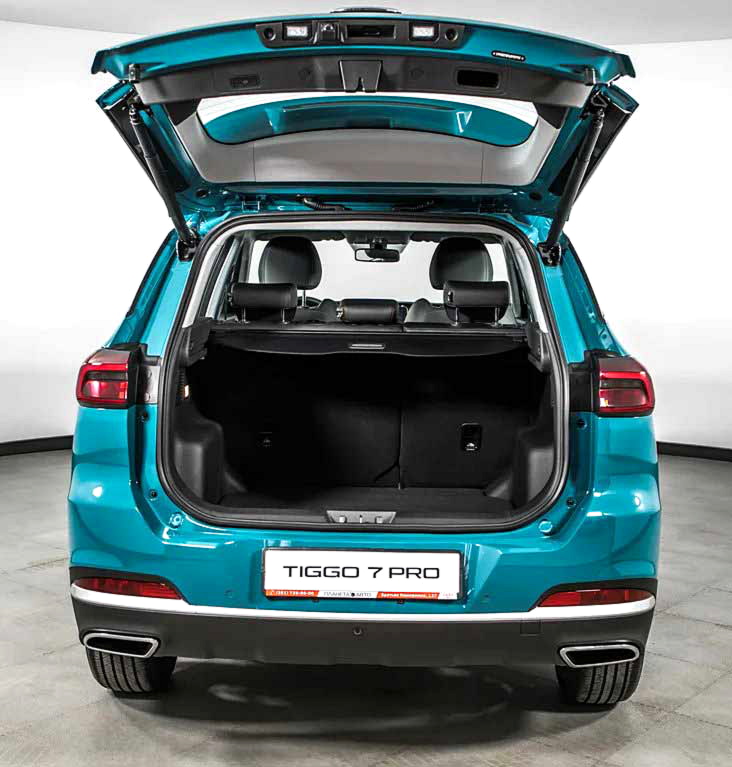 Behind in the trunk there is a small curb that does not allow cargo to spontaneously fall out of the car if the car is tilted.

There are hooks for fixing luggage on the sides of the cargo compartment, a backlight is located on the left side, a 12-volt outlet is not provided by default.

The top curtain is a retractable type, it can be easily dismantled.

In the underground space, under the false panel, there is a full-size spare tire, an organizer with a jack and a wheelbrace is laid on top of it.

Under the wheel itself there is a small noise and vibration isolation layer, but around it there is only painted body metal.

The backs of the sofa of the second row are two parts that are laid out independently of each other, divided among themselves in a ratio of 60/40. 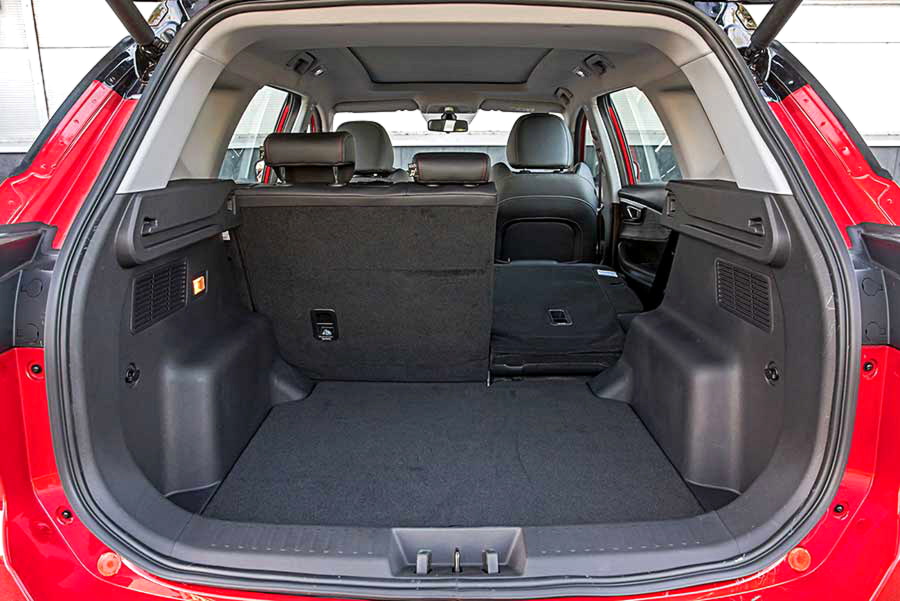 When they are folded, a flat floor is not obtained, and there remains a slight upward slope closer to the front of the body. But the step can be compensated by placing something like an air mattress here.

The crash test was conducted by the Chinese Center for Automotive Technology and Research CATARC according to the C-NCAP methodology. Unfortunately, the previous version of Chery Tiggo 7 without the “Pro” prefix passed the safety tests. Nevertheless, we can assume that the new model, built on the same T1X platform, will be at least as good as its predecessor. With a frontal impact on a collapsible barrier at a speed of 64 km / h, 92 percent protection was noted. The loads on the chest of the front riders and on the passenger’s left shin were subjected to little criticism. A side crash test on a crushable barrier at a speed of 50 km / h did not reveal any risk zones at all. In total, the SUV earned the maximum 5 stars and 56.6 points out of 62 possible.

Chery Tiggo 7 Pro has three versions in its arsenal: Luxury, Elite and Prestige. The choice is not so great also because the specifications offer only one turbo engine and transmission type with front-wheel drive and a CVT. But in terms of equipment level, the available 3 versions are able to provide a set of equipment that is inaccessible to most competitors.

The average Elite version costs 2,609,900 rubles. This option is replenished with such pleasant things as 2-zone climate control with additional deflectors for rear passengers, a driver’s seat with electric adjustments in 6 directions, a heated steering wheel, an electric tailgate, as well as side airbags front and rear.

The flagship Prestige equipment at a price of 2,739,900 rubles endows Chery Tiggo 7 Pro to the maximum. The owner’s services are additionally offered: a panoramic glass roof with a sliding sunroof and a sunblind, electric adjustments of the front passenger seat in four directions, an all-round visibility system, a rain sensor, inflatable airbags in a circle, illuminated mirrors in sun visors and LED lights for second-row passengers . Body painting with metallic effect enamel is offered at no extra charge.

In order to decide for yourself whether the car is worth attention or it is better to look at other options right away, you need to look at the main advantages and disadvantages of the vehicle. As for the advantages of this SUV, here we can highlight the following:

Along with the obvious advantages, it is also worth highlighting some of the shortcomings of the Chery Tiggo 7 Pro 2022 crossover, which include a meager range of power units and transmissions, the lack of all-wheel drive modifications, and not the richest equipment among classmates.

In the most charged equipment, the Tiggo 7 Pro crossover is equipped with a large panoramic roof with an electric sunroof and receives an all-round visibility system. 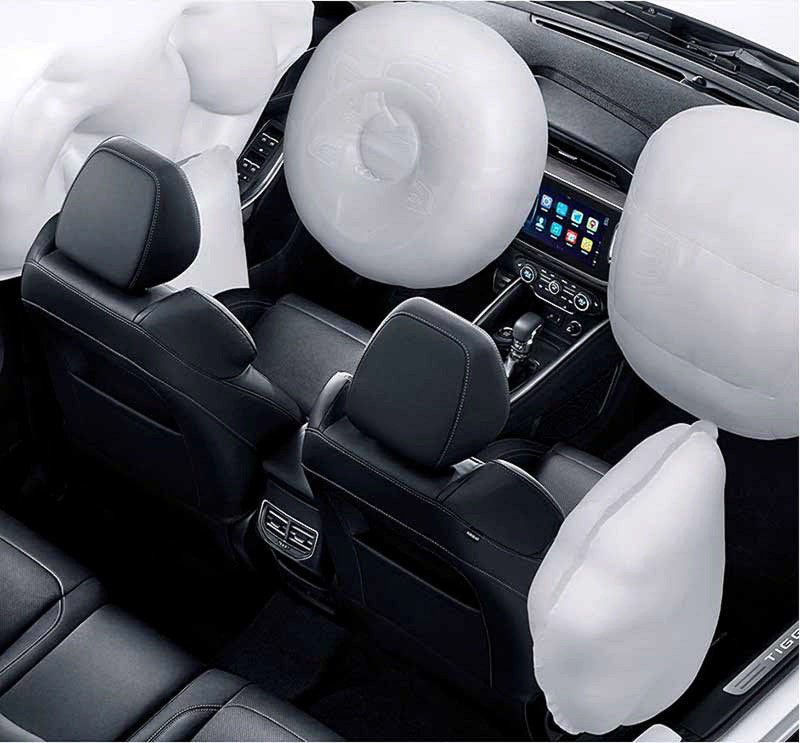 There is also a rain sensor, multi-color atmospheric lighting is responsible for the cozy atmosphere in the cabin.

Both sun visors are also illuminated, there is wireless smartphone charging, and autonomous ceiling lights have been added for second-row passengers. 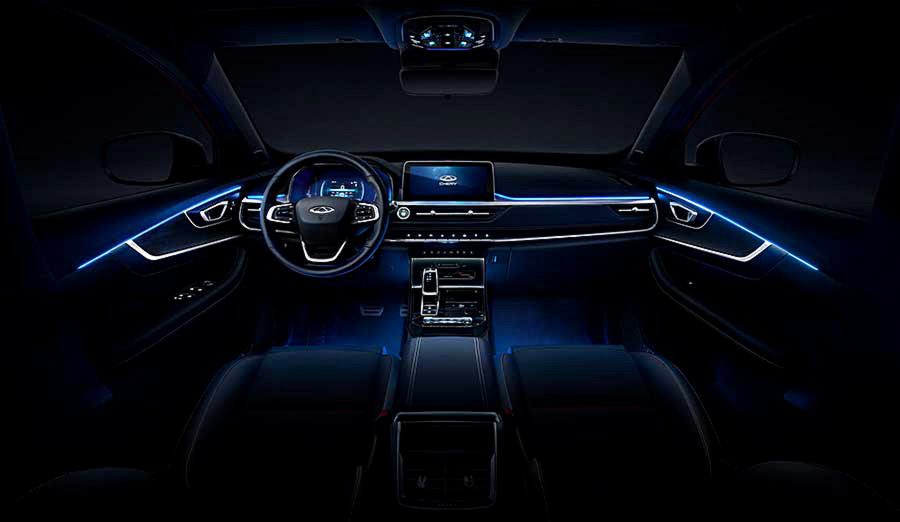