Drink water from your face

In the photo: the front of the Changan Uni-K crossover looks very futuristic

As the Chinese joke, the Uni-K is a Cayenne for the poor who can’t afford a Porsche. Jokes, jokes, but over the past two years since the presentation, the design of the car has not become outdated for a day. The stylish crossover really resembles cars from Zuffenhausen – not a bad role model.

The front of the car follows the Vision-V concept, which debuted on fellow Uni-T. Live, the car resembles spacecraft that science fiction writers saw in the middle of the last century. Narrow LED headlights are located at the very top of the front bumper. In fact, the entire bumper is the front of the car. The hexagonal grille has a honeycomb structure, flanked by Y-shaped strips of running lights. At the bottom perched radar adaptive cruise control. And two “laser guns”, reminiscent of parking sensors, turned out to be sham elements. What surprised: a large car has only two “parking sensors” in front. Saving on the little things? 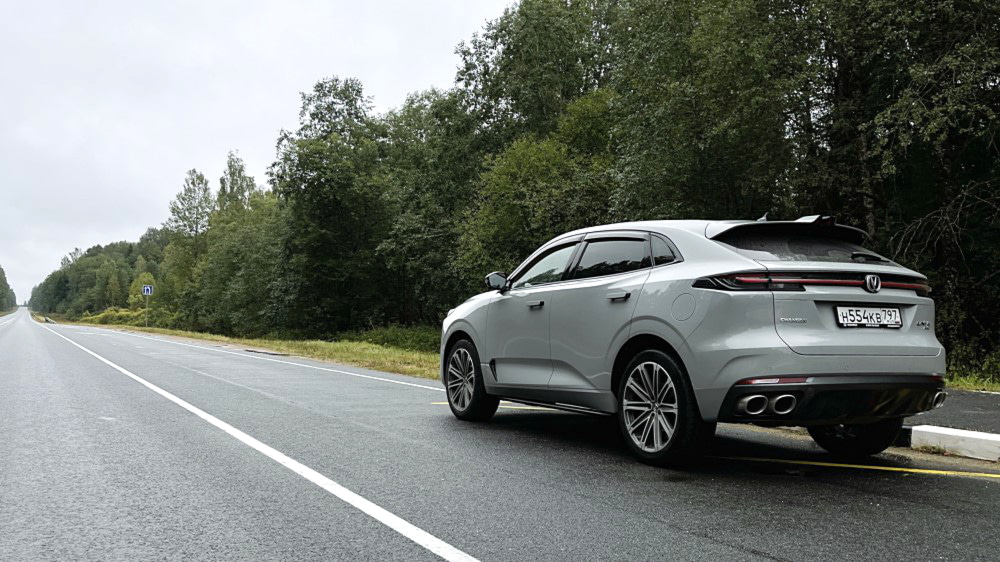 In the photo: live, the car resembles spacecraft that science fiction writers saw in the middle of the last century

The sportiness of the design continues in the profile of the car. Narrow side glazing and a window sill upturned to the stern give the silhouette a swiftness. Hidden door handles, sharp edges of stampings, the absence of unpainted plastic on the bottom of the body stylistically hide the “fat” sides of the car. Huge wheels hid in swollen arches, 20 or 21 diameters, depending on the configuration.

But where the designers have diverged in earnest is in the back. A huge spoiler and two “guns” of brake lights in the middle are inspired by interstellar spacecraft. The LED strip of parking lights extends the entire width of the car and ends with side lights in the form of a grille. The turn signal strips, both front and rear, are dynamic. Well, all this splendor ends with double-barreled exhaust pipes. They are real, but the pipes themselves are recessed a little deeper. What prevented them from being made a single element is a mystery. 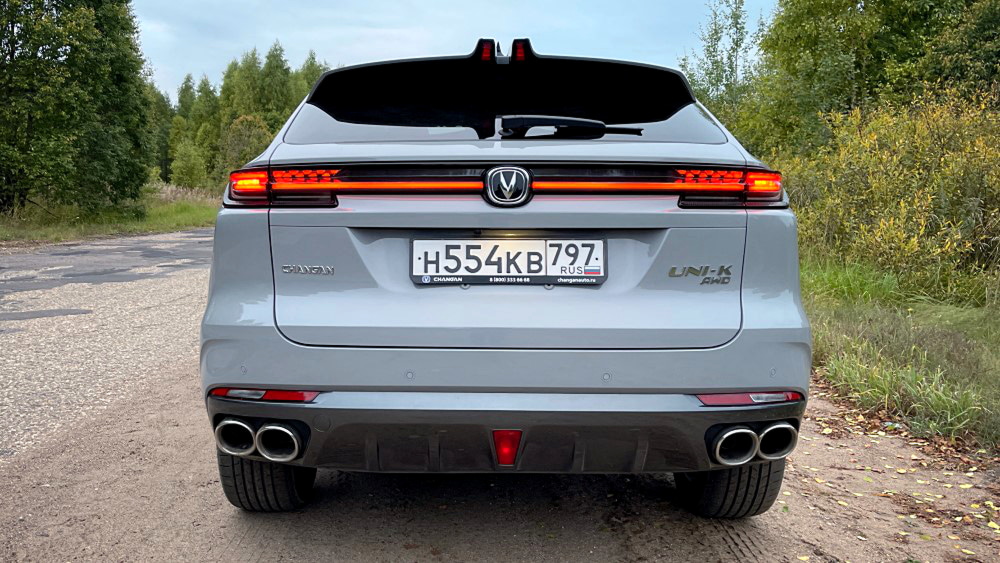 In the photo: the imagination of the designers was especially rampant on the back of the Changan Uni-K crossover

Design efforts were not in vain. Changan Uni-K is turned around, examined and photographed. Each stop turns into a presentation. People walk around, look into the salon, click their tongues and talk about the progress of Chinese design thought. I confess that, moving away from the car, I involuntarily glanced at the bright shapes and bold lines. Complementing the picture was the bright color of the test car, which received the romantic name “atomic gray”.

This car has a very modern and sporty exterior. In front, you will find a radiator grille with an unusual design and narrow LED optics. Slightly below are Y-shaped running lights. The side profile shows us rather narrow glasses. Massive arches house 20- or 21-inch wheels. It is the back of the car that looks the most attractive. The roofline continues with a large spoiler, in the center of which are two additional brake lights. LED lighting blocks are connected by a wide light strip. Two pairs of exhaust pipes peek out from the bumper, adding even more sportiness to the crossover.

The interior of the car looks very digital, because there are several screens at once. The finish itself is quite high quality and pleasant to the touch. The chairs are comfortable and comfortable to sit in. As for space, due to the rather large dimensions, the model offers a lot of space inside. There are almost no physical buttons in the interior. Among the minuses, it can be noted that tall people may experience discomfort when traveling. 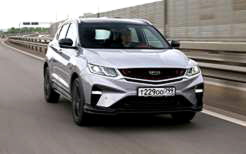 On the right display tidy, you can display streaming video from the camera under the rear spoiler. Visibility is mediocre – the hood is high, the pillars are thick. A surround view system will come in handy – until the lenses get dirty.

The “square” steering wheel is more like a steering wheel. Although you have to turn it no less than usual – from lock to lock 2.7 turns. You turn on the right turn signal – it starts to “tick” in the right ear, turn on the left – in the left. The fact is that the sound is produced by speakers installed directly in the headrest.

The turbo engine is well “friends” with the machine, and it is convenient to control traction with the floor accelerator. But acceleration “to the floor” is not impressive – there is no official data, and subjectively Changan barely leaves 10 seconds to hundreds. Not happy and spineless engine sound. 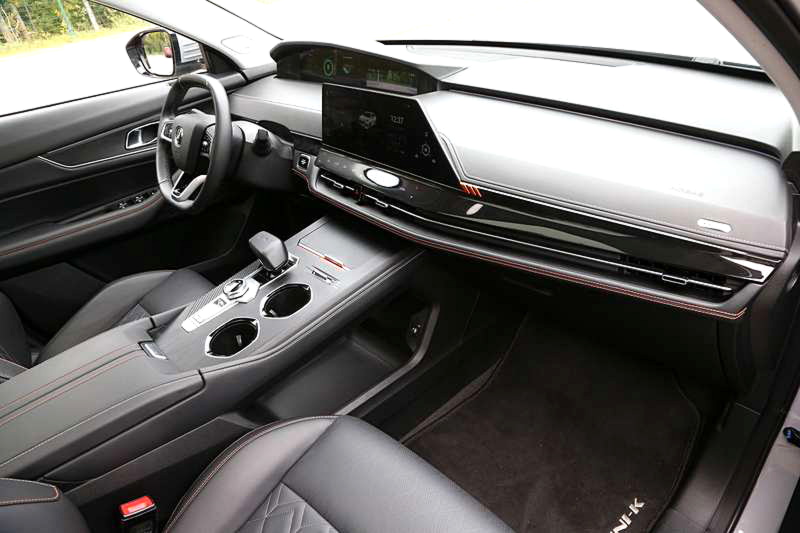 Handling in the city and off-road

As you know, the chassis of the Changan UNI-K does its job perfectly. A well-tuned suspension allows you to calmly drive over medium-sized bumps. The brakes have a good response – they do not need to be pressed hard to stop. The car drives great on flat roads. Acceleration is smooth, engine power is enough everywhere. However, the “automatic” does not have a quick response, because it takes about a second to start changing gears. When entering into sharp turns, rolls begin. Of course, the stabilization system does its job, but at low speeds it does not activate.

The dynamics of the car is quite average. The speed is gained smoothly, because the power unit is quite powerful. Separately, it is worth noting that Chinese engineers installed excellent sound insulation in the cabin. At high speeds, you will only hear small knocks and sounds from the tires. Obviously, the model will not show itself in any way on strong off-road. Its limit is the primer on which the ride will still be comfortable.