Each package, and therefore the price of the F Pace, is directly related to the type of design you prefer. Thus, the car that costs the most cannot look the same as the most budget car.

In total, eight different trim levels of the Jaguar F Pace are currently available to the public, differing from each other in style, cost and power performance:

Each presented equipment is available for purchase at any car dealership of an official Jaguar dealer in a particular country, including Russia.

Prices, without exception, apply to all countries of the world, that is, the amount presented will have to be paid regardless of where you live.

Jaguar can be attributed to the type of car that can be forgiven a lot for their character, because owning it brings real pleasure. Any connoisseur will attest to the fact that the cars of the kingdom have a certain soulfulness, and this makes talking about competition a little counterproductive.

And yet, the main competitors, given the price segment and brand recognition, are not difficult to identify. it Porsche Macan, which is more expensive than the 2019 Jaguar F-Pace, is more powerful and faster. Prices for it start at 3,500,000 rubles for a copy with a 252-strong heart.

Also noteworthy Mercedes GLC, which delights fans of the German brand with its comfort and reliability, but subjectively loses to the Jaguar in style, and also clearly exceeds the price. The most basic version of the GLC is available to the buyer at a price of 3,800,000 rubles.

It can also be distinguished Audi Q5, which relies on the comfort of the owner and measured driving. The most budget version of this crossover will cost from 2,300,000 rubles, but the car has no other strengths – if you put them side by side, your eyes will fall on the Jaguar, while the Audi will remain in the shadows.

What to pay attention to

Rear parking sensors can beep even when there is nothing there. A software update should fix this error.

Some owners are unimpressed with the fit of the panels, especially on the bumpers, hood and tailgate where large gaps can occur.

Squeaks are more common than you would expect on a premium car, especially on high mileage vehicles.

The AdBlue tank located on diesel models needs to be topped up every 19,000 km or so: this is included in the service plan if you have a service at the dealer.

In terms of interior design style, there is much that will seem familiar, because it is not surprising that the concern prefers to combine not only the modern trend of automotive culture, but also retains its own styles and character of equipment and decoration. The style is unparalleled among other leading premium manufacturers, the company has managed to confirm its unique trait.

The speedometer panel hides not simple “wells” with a classic system, but panels that imitate them with visualization. It is clear that it could not be otherwise in such a segment, so we are seeing a combination of almost two eras. The steering wheel is a functional unit that allows you to control all the main tasks and systems of the Jaguar F Pace modification.

The center console is made in a characteristic style, where the leading role is given to a couple of deflectors separating one zone from another, followed by a multifunctional unit with a monitor. Just a huge screen with a multimedia complex of the modern generation.

Below, they “prescribed” an adaptive unit responsible for the climatic state in the cabin. In addition to weather elements, other main keys for controlling systems are also placed there. 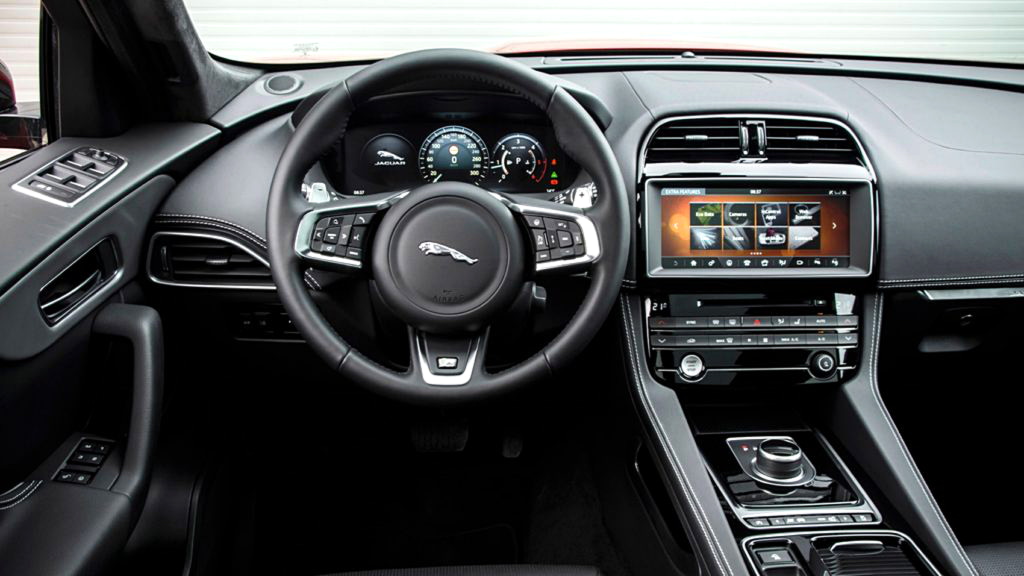 The central tunnel hides the traditional “puck” with gear selection, highlighted by rich decorative inlays made of real wood. In addition, there are a couple of roomy pockets for small items on the tunnel, and, of course, a huge armrest with a convenient organizer.

The interior combines not only luxury, but also a characteristic sporty spirit, especially noticeable in the structure of the seats, which only show their luxurious embrace. Powerful lateral support, with a huge number of adjustments and settings.

For the rear passengers, and there can be three of them here according to the passport, a wide sofa is available, with comfortable profiles. But, that’s not the task, two riders can comfortably fit there, because the central tunnel protrudes quite impressively at the feet of the average passenger. It is worth noting that the designers thought over the sofa folding system in such a way that each element has a separate formula.

Those interested in luggage space will be surprised by the modest 500 liters, which in the premium segment seem impressive. However, this is not all, because thanks to the ability to fold the rear backrests 40:20:40, 1,500 liters are already available. 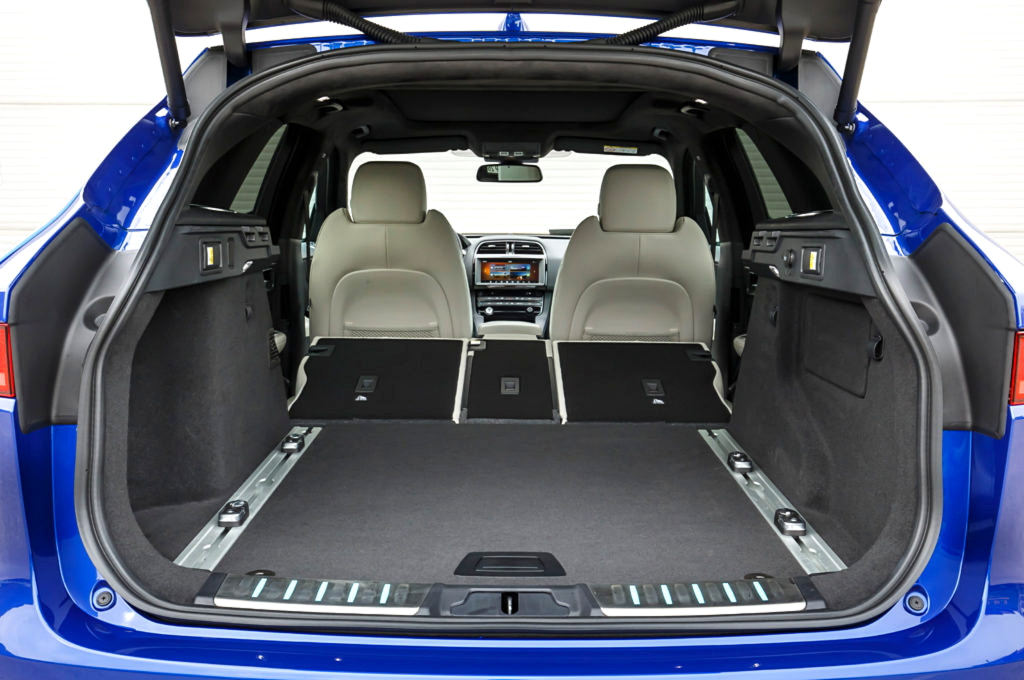 The 2019 Jaguar F-Pace SVR was internally codenamed “Magnificent Beast” during development, which is fitting. At first glance, it’s not obvious how different the SVR is from the rest of the F-Pace lineup. The ride height is the same, but the wider tires make the car feel wider. Aside from the SVR badging, there are just a few subtle body changes.

There are two vents on top of the hood, and there are slanted slits right behind the front wheel arches. These are actual thermal extractors, and the side vents also act as an aerodynamic outlet from the wheel well, helping to control airflow and generate a little downforce. There is a similar deep crease behind the rear wheels, but it’s more of an aesthetic decision with reflectors hidden inside. Thankfully, the four tailpipes at the rear are functional in the best sense of the word.

Pressing the engine start button results in a healthy rumble and growl from the forced start of the V8. It’s not as raucous a launch as the F-Type, which, to be honest, can be barely audible if you want to keep good relations with your neighbors. The low baritone at idle only hints at the auditory potential that is unleashed when the Jaguar F-Pace SVR is driven aggressively.

Instead of the usual disk F-Pace gear selector, the SVR borrows the toggle shifter from the F-Type. By pressing the engine start button and pulling the handle back, we are ready to start. Jaguar claims the SVR will hit 100 km/h in 4.3 seconds, 2.1 seconds faster than its closest F-Pace S. On a reasonably long straight, it will hit 283 km/h.

Hit the gas pedal hard and the SVR blasts off with enough noise and fury to bring a satisfied grin to the driver’s face. You feel your body press against the sports seats as the passengers around you tighten their grip on the door handles. In Dynamic mode, shifting the eight-speed automatic transmission is extremely quick and barely noticeable. The variable sport exhaust isn’t as loud as the F-Type. And gunshot-like sounds at full throttle aren’t as frequent, but they’re just as enjoyable until you get a little addicted to them. 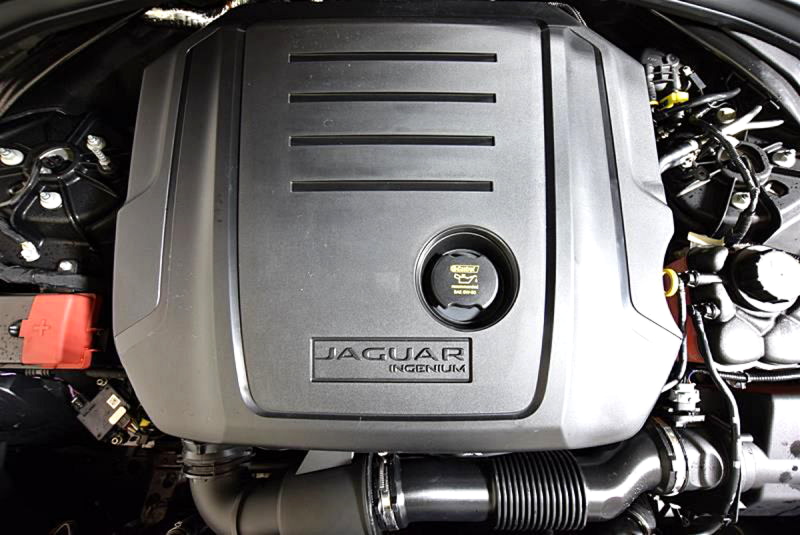 The body with overall parameters of 4731 x 1936 and 1652 mm is optimally adapted for the operation of the car on city streets and for the requests of outdoor enthusiasts.

The traction characteristics of the engine range suggest excellent acceleration dynamics, a test drive confirmed the possibility of towing trailers weighing up to three tons.